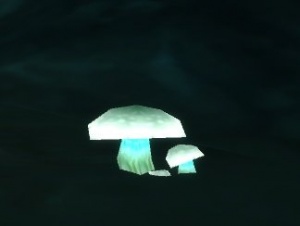 Ghost Mushroom is an herb that can be gathered with Herbalism (245).

As far as Azeroth goes, Ghost Mushrooms can be found only in Un'Goro Crater (in Fungal Rock). They grow exclusively underground. Each node yields only one Ghost Mushroom with a relatively high respawn time compared to other herbs.

In Outland, they have been spotted in caves in Zangarmarsh. The frequency of spawns seems to be dramatically higher in these caves than in Azeroth. A popular spot is the Funggor Cavern, in the south-eastern part of Zangarmarsh. Often up to three nodes are spotted at one time.

Nature elementals such as Irontree Stompers, Irontree Wanderers, Withered Protectors, and all the Warpwood mobs in Felwood will occasionally drop a Ghost Mushroom.

Until the Darkmoon Faire was revamped in Patch 4.3.0, Lhara would sell up to 4 Ghost Mushrooms (limited supply) for 15 silver each.

This can be a very sought-after herb due to its scarcity and its use in invulnerability potions. Before Warlords of Draenor, it was the only way to make invisibility potions. It was also used by warlocks in their epic-mount quest (now obsolete), which required two Elixirs of Shadow Power. Since transmogrification was implemented, Ghost Dyes are in demand for some unique armor appearances. Since nodes are rare and out of the way and only give one each, supply is tight.