From Wowpedia
(Redirected from Ghostcrawler)
Jump to: navigation, search

"Ghostcrawler" redirects here. For the creature of the same name found in the Abyssal Depths, see Ghostcrawler (mob).

“I like long walks on the beach, drinking gin, and nerfing paladins.”

Greg Street (alias Ghostcrawler) is the former Lead Systems Designer for World of Warcraft.[3] He is now Head of Creative Development for Riot Games.[4]

On November 27, 2013 he announced on Facebook that he would be leaving Blizzard Entertainment to pursue a "great opportunity for something new and exciting".[5] It was later officially confirmed on the forums,[6] and he became Lead Game Designer at Riot Games,[7] before moving to his current position of Head of Creative Development.

After leaving, he changed his Twitter handle to @OccupyGStreet on December 5, 2013.[8] He has recently managed to retake his @Ghostcrawler account.

He earned a PhD in Marine Science from the University of Texas at Austin in 1996.[3]

He got his start in game design (his "foot in the door", so to speak) by designing a scenario for Age of Empires that was eventually included in a shipping product.[9] 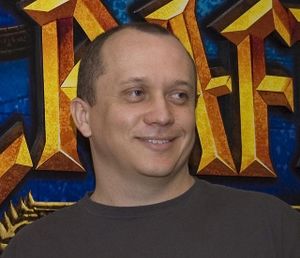