For the book in The Sunwell Trilogy, see Ghostlands (book).

Sanctum of the Sun.

The Ghostlands is a level 10 - 60 zone in the northern Eastern Kingdoms. The Ghostlands were implemented in the Burning Crusade expansion. This zone is part of the original Eversong Forest from which Eversong Woods was later reclaimed. Today, this zone appears on the world map north of the Eastern Plaguelands and south of Eversong Woods. The forest troll instance Zul'Aman is located here.

This shadowy region of Quel'Thalas has seen much death and destruction in recent years. Ruined and deadened by the Scourge's march to Silvermoon, the Ghostlands are a haunted, plagued, decrepit, and dangerous area. Vengeful phantoms of the battles with the Scourge and a majority of the undead remnants left over from the invasion of Quel'Thalas still linger here, as well as one of the most vile traitors to the elven people.

Once a part of Eversong Forest, the Elrendar River was all that separated these forests from the northern woodland. Its largest settlement was Tranquillien, and housed the abode of the renowned Windrunner family. An'owyn, An'telas, and An'daroth, three locations in the forest from which key ley lines forked, were each imbued with a mooncrystal that connected all the way to Quel'Danas. With the crystals in place, they passively empowered Ban'dinoriel, the great magic shield protecting Silvermoon. The mooncrystals' locations were hidden in an invisibility stasis and protected by guardians, to ensure no invaders learned their secrets.[1] The fierce Amani trolls also based their power in this region of Quel'Thalas, from their foreboding city of Zul'Aman.

Formal entrance to Quel'Thalas is taken through the Thalassian Pass, located far to the south.

The entrance to Quel'Thalas, named the Thalassian Pass, located in southern Ghostlands.

The Ghostlands claimed their name during the Third War, in which the undead Scourge invaded Quel'Thalas and capriciously defiled, slaughtered, and tore their way through the woodlands. The Elfgates were overcome, the mooncrystals were pilfered, their guardians slain, and the entire southern woodland fell to the Scourge's corruption. Most, if not all of the elven settlements were obliterated during the invasion, not to be reclaimed until years later. Towns and villages were razed, and human necromancers saw to the reanimation of fallen elves. Under Ranger General Sylvanas Windrunner, the Farstriders put up a vicious but impossible fight against the Scourge, and were forced north.

The elves, now calling themselves the blood elves in honor of the perished, eventually gathered their strength and began taking back portions of Eversong Woods, restoring much of their kingdom, including their beloved capital. However, the elves were divided on how to approach the Ghostlands. Some were content to remain north, while others (such as Lady Liadrin) would not rest until all of Quel'Thalas was reclaimed, the Scourge destroyed and driven from the land forever.[1] When the Blood Knight order was formed, several of their first missions took place in the Ghostlands, and the Farstriders also began re-establishing a presence.

It was also in the Ghostlands that Dar'khan ambushed the Blood Knights as well as setting Lor'themar Theron ablaze before being killed by the Regent Lord.[1]

The Ghostlands are a level 10-20 zone blood elves and all Horde characters can quest through. The zone's story begins some time after Blood of the Highborne, and focuses mostly on reclaiming the land from the Scourge. The remnants of the Scourge still dwell in the deadened forests, lingering spirits continue to aimlessly haunt the land they had lost their lives defending, and all manner of undead horrors still plague the land; however, the blood elves, reinforced by their new Forsaken allies - Sylvanas Windrunner's people - have begun to make real progress against the invaders. Among other things, adventurers are tasked with reclaiming the fallen spires and towns, laying restless spirits to rest, battling the opportunistic Amani trolls, and finding a way to bring the great traitor Dar'Khan Drathir to justice once more.

Tranquillien, Farstrider Enclave, and the Sanctum of the Sun have been reclaimed as key points to stand strong against the elves' many enemies. Dar'Khan rules the lingering undead from Deatholme, while the Amani have scattered outposts across the zone. A regiment of night elves, far from Kalimdor, has also arrived in the Ghostlands in a hostile manner.

The Magisters and the Farstriders, with help from adventurers, succeeded in killing Dar'Khan and halting his plans for the region. Zul'jin, the feared warlord of the Amani, would also fall in the months to come, ridding the Ghostlands of two of its most hated enemies.

Although the blood elves had made progress against the Scourge, even without the presence of Dar'Khan, the undead still occupied the land in great numbers. The vigilant Farstriders hold onto the land tenuously, relying on continued Forsaken aid and, recently, the support of the Sunfury.[2]

When the Zandalari formed a new troll empire, the Amani remnants, now led by Warlord Daakara, pledged their allegiance to it. Instructed to gather in Zul'Aman and marshal their forces, the Amani found enemies in Silvermoon's ranger-general Halduron Brightwing and his Farstriders, as well as his Horde ally Vol'jin of the Darkspear and his Siame-Quashi, and Vereesa Windrunner and her rangers from Dalaran. The three of them combined their forces, and the Amani's latest attempt to reassert dominance ended in failure.

The Ghostlands was used as a covert meeting location by Sylvanas and Vereesa Windrunner, who bonded in the place of their birth. The Scourge still seems to be active in the Ghostlands to some degree.[3]

After the Argus Campaign, the Windrunner sisters reunited and traveled to the Ghostlands witnessing the corruption. They passed through the Goldenmist Village and killed its ghostly inhabitants. They continued to the Windrunner Spire, defeating the undead elves stationed there. Sylvanas had planned to ambush Vereesa and Alleria bringing her dark rangers along, hiding near the Spire. Sylvanas didn't give the signal for the ambush, so Sylvanas' sisters left the area via teleport without knowing about the threat.[4]

In search of the exiled group of blood elves led by Magister Umbric, Alleria returned to the Ghostlands, accompanied by the Alliance adventurer. They traveled to the Sanctum of the Moon, Andilien Estate, and Dawnstar Spire finding clues about Umbric's research of the Void and whereabouts.[5]

As part of a ceremony of remembrance held each year in the kingdom, Lor'themar Theron accompanied the blood elf adventurer throughout the Ghostlands, shining the light of the Sunwell to reenact the Scourge's invasion of their lands and the sacrifices made in Quel'Thalas' darkest hour. The journey took them from Tranquillien to the Thalassian Pass, where the battle began;[6] north through the Dead Scar, where the elves made a valiant but futile attempt to halt the invaders' advance;[7] to Windrunner Spire, where specters of slain rangers were laid to rest and a statue has been erected to honor the heroism ranger-general Sylvanas displayed in life.[8] The adventurer continued the ceremony in Eversong and Quel'Danas before returning to Silvermoon.

After being deposed as Warchief of the Horde, Sylvanas briefly returned to the Ghostlands to rendezvous with her most loyal followers at her family's fallen spire. She did not sojourn there long, hunted on both continents by the blood elf Farstriders, night elf Sentinels, and troll headhunters,[9] and left for parts unknown after sharing her parting thoughts on the war and what is to come.[10]

Tower of the Damned.

Ghostlands is home to several characters of note. At Tranquillien, Dame Auriferous and High Executor Mavren work together in the battle against the Scourge. At the Farstrider Enclave, Captain Helios and his rangers attempt to fight back the relentless attacks from the Amani trolls. And at the Sanctum of the Sun, Magister Kaendris sends bold adventurers into the heart of evil itself — Dar'Khan Drathir's Tower of the Damned, in the center of his fortress of Deatholme. Outside Zul'Aman Vol'jin, Halduron Brightwing and Vereesa Windrunner discuss plans concerning the renewed Amani threat. 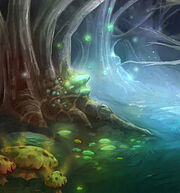