From Wowpedia
(Redirected from Ghostlands (book))
Jump to: navigation, search 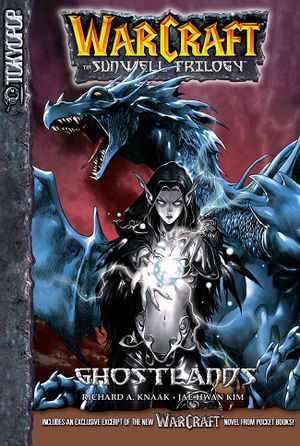 Ghostlands is the third original English manwha written by Richard A. Knaak and drawn by Kim Jae-Hwan of The Sunwell Trilogy. It was released on March 13, 2007 in the US [1] and February 28, 2007 in Canada [2].

The mighty Sunwell, source of the high elves' might, had been thought lost... until now! In the ruins of the Ghostlands, a young blue dragon and his companions must fight to save one of their own from certain death. But here, the dead refuse to rest easy!