Ghouls are undead acting as the shock troops for the Scourge. These lumbering, rotting corpses were once innocent townsfolk who have made the final transition into true undeath. Ghouls have great stamina and revel in combat with living beings. Ghouls are ravenous cannibals who can replenish their health by devouring the flesh of fallen warriors, friend and foe alike.[2] 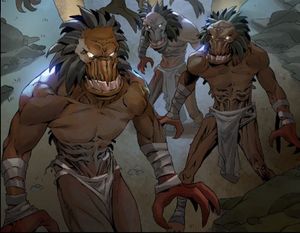 A group of ghouls in Windrunner: Three Sisters.

Ghouls have the appearance of a bent, twisted humanoid figure. Much of their flesh has rotted away, exposing a fair amount of bone and twisting facial features until they are unrecognizable as human. As undeath progresses in a victim, it twists and corrupts the body, growing fangs and claws.

Only the Scourge and a few other necromancers know the secret of creating ghouls. Death knights have raised ghouls to their will to fight alongside them as well.

Although most ghouls are mindless, Horgus the Ravager is one that managed to retain a fair amount of intelligence, and was given a very high rank in the Scourge. It has been shown that ghouls can speak but most of what they say are driven through some sort of hunger for meat, such as Eliza.

During the Third War, ghouls were used as basic attack units and also used to harvest lumber to build Scourge structures.

During the later stages of the War against the Lich King, the Fleshwerks started to use scraps of saronite from building Malykriss[3] to enhance ghouls.[4]

During the third invasion of the Burning Legion, the Knights of the Ebon Blade summoned packs of ghouls to combat the Legion. Though individually frail and unintelligent, ghouls served them as fodder, overwhelming their enemies with sheer numbers.[5] 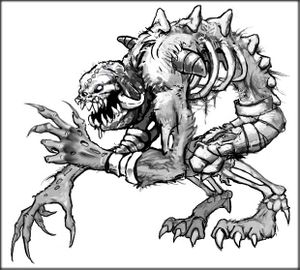 The ghouls of Warcraft III

In Warcraft III: Reign of Chaos, ghouls are the basic warriors of the Undead Scourge. In addition to being combat units, ghouls also harvest umber. They harvest 20 lumber as opposed to human peasants and orc peons that start with 10.

During the Zombie Infestation world event, Conspicuous Crates could be found in Booty Bay, that if opened would give the player a 1-10 minute plague infection. If the plague was allowed to complete its duration or if the player died while infected, the end result led to the player becoming a zombie (with the appearance of a ghoul). As a zombie, the player is able to infect other players, leading them to become undead, as well. The hits and attacks an infected player receives hasten the process towards mutation. 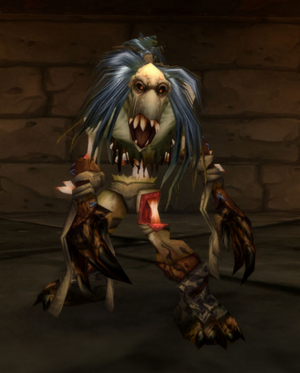 In World of Warcraft: Wrath of the Lich King, a new ghoul model was added, though the old model also continues to be used.

As a death knight minion 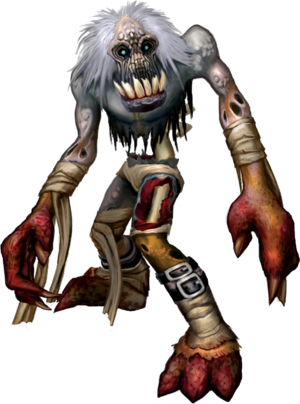 A Ghoul from the Monster Guide.

Ghouls are the main forces of the undead Scourge. They are vicious creatures, retaining little of their humanity. The plague has torn away most of their memories, leaving only hunger and basic survival instincts in their place. Ghouls are feral and animalistic and are often considered to be the lowest form of undead. While generally humanoid in appearance, a ghoul is easy to recognize on the battlefield by its pallor, hunched-over posture, and feral face. Even those who were close to the individual in life have difficulty recognizing their loved one; the transformation removes most vestiges of humanity as well as identifying features of voice and body structure. Ghouls of the Scourge are strong fighters, but they are not particularly tough. Their ability to regenerate, coupled with cannibalizing the dead, makes them far tougher opponents than they may seem. Because of their limited intelligence, their greatest tactical insight is to hit something until it’s dead. Thus, more intelligent beings often direct ghouls of the Scourge or send them into suicide situations where no tactics are needed. Ghoulish tenacity and fearlessness make them feared and loathed opponents (as does their habit of eating slain foes). They have some animalistic cunning when it comes to ambushes and other primitive attack strategies. They do not use weapons (having little brains with which to understand the concept) and fight with their bare hands or with a club or other found item.[6]

Ghouls speak in growling, phlegmy voices, but they only mutter to themselves; they do not normally communicate meaningfully.[7] But do speak Low Common.[citation needed]