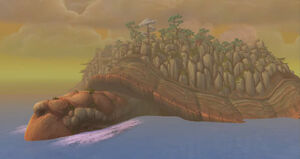 They can be found both in the southern and northern seas of Azeroth, as indicated respectively by those used as submarines during the Second War and those used currently as boats by the tuskarr. Some giant turtles fled the then-corrupt Teldrassil,[4] only to die when they beached themselves in Darkshore. Others used to frolic around Nordrassil before it was sacrificed in the Third War.[5] Giant turtles are known to live in the Veiled Sea as well.[6]

The giant sea turtles captured by the Stormreaver clan and used as submarines were native to the southern seas. Pacified by potent spells of control, these lumbering monstrosities were fitted with watertight canopies strapped onto the backs of their shells and were used as submersible orcish craft. By submerging under the waves, the giant turtles could steal upon unsuspecting enemy craft and report their position to the Horde fleet as they were visible solely to towers, creatures of the air, and other submersible vessels. The daring goblins of the Steamwheedle Cartel[7] who controlled them were dedicated to destroying enemy ships by launching hazardous, steam-driven canisters containing highly volatile liquids that could shred even the strongest of armor.[1]

Gwennyth Bly'Leggonde used to give background on giant turtles if their beached remains were brought to her. She stated that the naga used them as transportation as well, as some beached turtles were found with carriages on their backs. The naga carriages were used both in battle and in transportation of their supplies on to land. The naga did not treat their mounts well, and often let them get killed. 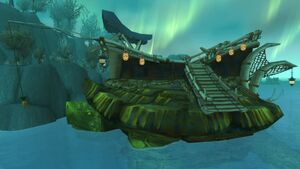 Giant turtles are used as a transportation means in Northrend in the form of tuskarr turtle boats. Tuskarr steer the turtles by the use of carrots on a fishing line.

The Wandering Isle is a massive island on the back of a giant turtle, known to the pandaren as Shen-zin Su. It is inhabited by curious pandaren who left their homeland of Pandaria centuries after the Great Sundering[8] in order to discover the other lands and races of Azeroth. The Isle has been drifting on the ocean ever since.

A deceased giant turtle submarine of the Second War can be found on Crestfall. 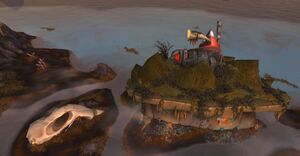 The corpse of a Horde giant turtle submarine from the Second War on Crestfall.

The giant turtle battle sub, one of the most notorious weapons of the Second War, is really not a vehicle at all. It is a harness and cockpit that fits atop a live giant turtle (with an attached mental control rig). From within the pressurized compartment, the pilot issues commands to the creature as though it were a mount. The battle sub also includes a short-ranged cannon or rocket launcher capable of damaging ships, but only if the giant turtle surfaces.

In the Second War, the Stormreaver clan captured giant turtles for this purpose and pacified them with powerful spells of control. Since that time, goblins have bred giant turtles to be calmer and more docile. These turtles, which the goblins use for their subs, are tamed and do not require magical control.[9]

A giant turtle lives in Witch's Hill. It communicates with a murloc witch.[10]