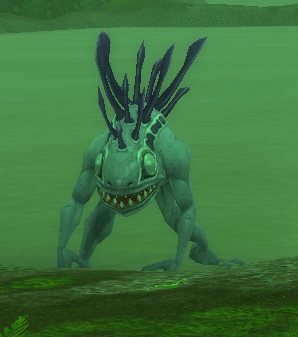 Giantfin in World of Warcraft.

Giantfin is a murloc who appears at the Slithering Scar in Un'Goro Crater during the Un'Goro Madness micro-holiday.

During his encounter, he will summon bubbles and start casting a long Lightning Nova spell. Adventurers must hide in the bubbles or get struck by lightning, but some of the bubbles will be filled with spear-throwing murlocs.

Giantfin originally appeared in the League of Explorers adventure for Hearthstone as the second boss of the Ruined City wing. He seemingly has a grudge against Sir Finley Mrrgglton, as he appears to constantly be shouting insults and vulgar phrases in Nerglish during the course of the boss encounter. Finley notes that "with better upbringing he could have been a decent sort".[1]