Gift of the Naaru

[Gift of the Naaru]. 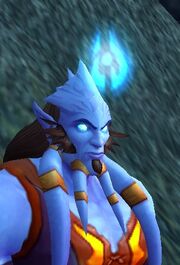 A draenei paladin using the Gift of the Naaru.

Gift of the Naaru is a racial ability of the draenei. It restores 20% of the target's total health over 5 seconds.

The Gift of the Naaru is a blessing bestowed by the divine naaru upon the draenei, and all draenei can tap into this blessing to heal injured allies.[1] The gift manifests in the form of a glowing blue rune or "forehead signet"[2] to signify that they are indeed touched by the Light.[3]

Velen's forehead signet is permanently visible, likely to signify his especially close connection to the naaru.

Tyrant Velhari, a prominent member of the demon-worshipping Sargerei, instead bears a fel-green mockery of the naaru's holy symbol in order to signify her conviction to the Burning Legion.[4]