From Wowpedia
(Redirected from Gilblin)
Jump to: navigation, search

“You never seen a gilblin before? They're crazy! Crazier than me! I just blow stuff up for a living, these guys are WHACKED! Dunno where they came from, but they're like awful fish goblins! Gills and everything!”

The gilgoblins, sometimes called gilblins,[3][4] gill goblins,[3] water-goblins,[5] or kelfin[6] are a species of aquatic goblin that live within the ocean. They were first introduced into the game with the Cataclysm expansion and can mainly be found in the deep sea in areas like Vashj'ir and Nazjatar, though other groups have invaded the coasts of the Swamp of Sorrows, Azsuna, and Stormsong Valley as well.

King Gurboggle is the self-proclaimed king of at least Gurboggle's Ledge.[7]

Gilgoblins have many similarities to goblins but also many differences. Their skin is blue or red with tiny dots. They possess gills on their necks, allowing them to breathe underwater. Gilgoblins have fins on the ends of their arms, with webbed hands and feet for swimming. Their ears resemble fins and their hair is a dark blue color. Their skin is also adorned with inky tattoos.

The adaptations that allow gilgoblins to survive the aquatic life has apparently drained some of their higher brain functions. Engineer Hexascrub and Fiasco Sizzlegrin both note that the gilgoblins are quite primitive, and that they seem intensely curious about their advanced equipment, sometimes suicidally so.[3] The gilgoblins of Vashj'ir hold the naga sea witch Lady La-La in high regard.[5] Most gilgoblins speak with broken grammar, but the Unshackled of Nazjatar speak fluently.

Gilgoblins live in big clams and caves, which they decorate with their new-found treasure, including cannons, cannonballs and other things.

The gilblins in Azsuna will occasionally refer to a "great kraken" when attacked. The identity of this creature and its role in their culture (what little of it there is) is unknown, though it may be Ozumat.

A group of kelfin are the bulk of the faction named the Unshackled. They are starkly contrasted to the rest of their brethren, showing great intelligence like their land-based counterparts and have a strong sense of community. Unlike the goblins of the land, they are extremely altruistic and selfless, living communally and looking out for one another; though this may have been a result of their former enslavement under Queen Azshara. The Unshackled have befriended Gral, a shark loa.[8] 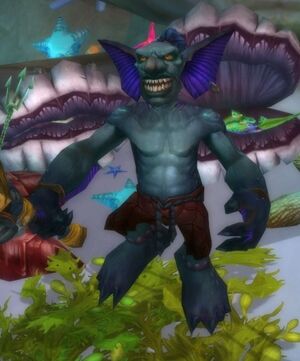