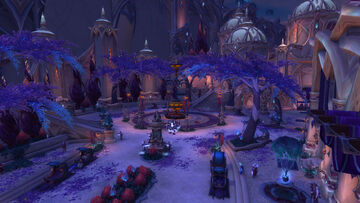 The Gilded Market is a public square in the Noble District of the nightborne city of Suramar. It can be found in the city's northeastern section, and is the first area encountered upon entering the Court of Stars and Noble Districts of the city. The market primarily consists of an open square surrounded by numerous houses and other structures.

Lying in the district of the city inhabited almost exclusively by Suramar's ruling elite, the Gilded Market is presumably mostly off limits for those who are not either of the aristocracy (or their servants), or members of the Duskwatch which maintains the status quo in the city. The market is accessed from the Moonbeam Causeway to the west and further leads onto the Moonlit Landing and Midnight Court to the east.

The Gilded Market's strong association with the city's ruling powers would make it a target of the Nightfallen insurgent faction during the civil war which raged across Suramar with the coming of the Burning Legion. As a result, security within the market and the entire district was particularly heavy for the duration of the conflict.

The Gilded Market sits at the westernmost side of the Suramar's Court of Stars and Noble District, and has thus traditionally been inhabited by the upper classes, who hold political power within nightborne society. Almost all of nightborne noble families make their home in the eastern districts of the city, and as such the area tends to be highly developed and affluently designed. Patrol Captain Gerdo appears to have primarily been in charge of Duskwatch security in and around the Gilded Market area.

With the onset of the third invasion of the Burning Legion, Suramar's arcane shield was lowered and the demonic Burning Legion was granted access to the city. Those who resisted this decision ultimately became the Nightfallen and would begin a civil war to attempt to expel the demons and depose Grand Magistrix Elisande. The nightborne aristocracy almost as a whole opposed the rebels, and the city's eastern districts became a powerful bastion for loyalists to the regime. 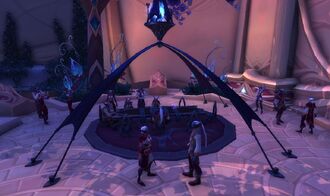 Many nightborne nobles saw the Legion's coming as a great opportunity, and fully embraced the ways of fel magic. These felborne, now totally corrupted by their newfound power, largely frequented the Gilded Market and the surrounding districts. The presence of such support for Elisande and the Legion made the Gilded Market a target for the Nightfallen rebels, though it was often too secure to attack directly, heavily garrisoned as it was by Duskwatch, demons, and felborne.

Relatively early in the rebellion, Nightfallen agents succeeded in releasing a captive devilsaur named Su'esh from its habitat in the Menagerie, after which it caused havoc and heavy casualties as it proceeded to rampage through the Gilded Market and Noble District.[1] This was known to have occurred on more than one occasion.[2]

On the night of a large banquet held in the Jeweled Estate of the Court of Stars in which Elisande herself would be in attendance, The Nightfallen managed to smuggle a group of disguised operatives into the Noble District in order to infiltrate the party and potentially eliminate the Grand Magistrix. The group eventually confronted Patrol Captain Gerdo and his Duskwatch guards as they attempted to pass through the Gilded Market. After an ensuing battle, the infiltrators succeeded in overpowering and slaying Gerdo, and continued on toward the Jeweled Estate and the main party, though they would ultimately not be successful in their main objective.[3]

At the time of the rebellion, at least one major noble house in the form of House Astravar had its residence on the square. Headed by Lady Aurore, the Astravars' mansion was the largest building in the Gilded Market. This additionally gave the locale a certain added political importance. As the insurrection developed, a position opened on the Grand Magistrix's inner council, and many prominent members of the nobility scrambled for the post. House Astravar was inclined to back Lady Ly'leth Lunastre (secretly aligned with the rebellion) and Aurore Astravar was approached by agents of the Nightfallen on Ly'leth's behalf to secure her support.[4]

After the rebel agents helped rescue Aurore's son, Ailen, from the clutches of the rival House Stelleris and returning him to the Astravar mansion in the Gilded Market, Aurore pledged the full support of her family to Ly'leth's bid, which she would eventually go on to win.[5]