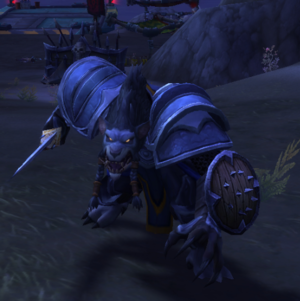 Gilnean Footmen are troops from Gilneas found across Darkshore, aiding the kaldorei in the reclamation of their home. They were sent on orders of Genn Greymane after Stormwind informed Tyrande Whisperwind that Stormwind could not send aid to them due to their forces being spread too thin. In this specific warfront, they, alongside other elements of the Gilnean military, appear to be led by Princess Tess Greymane and Lorna Crowley.

In combat, they change into Worgen Footmen, which does not alter their health or damage but merely is an aesthetic change. They, usually, change back right after combat has ended.