The Gilnean military[2] is the armed forces of the Gilnean people, serving under King Genn Greymane. The military of Gilneas defended the borders of the peninsula kingdom for centuries; having been strong enough to even be considered a formidable entity in Lordaeron, as well as one of humanity's strongest nations, despite being much smaller than its closest neighbor.[3] 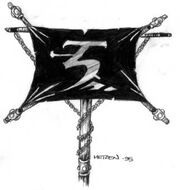 Gilneas' banner during the Second War.

At the time of the Second War, Genn Greymane rebuffed Anduin Lothar's calls for unity, stating that Gilneas' armies could fend off any foe.[4] Regardless of this, however, Gilneas did relent and send part of their military as a token force to ensure trade relations by the end of the war.[5] Gilneas was said to have fought with bravery; using tactics that required them to stay united. Despite this being noted as a token force, Greymane himself notably was said to have partook in combat versus the Horde; describing his battles with the orcs during the Second War to leaders of the Alliance later on.[6]

Towards the end of the Second War, however, Gilneas' desire to remain with the Alliance of Lordaeron soured, as they called for the extermination of the orcs instead of internment camps. To make matters worse, Gilneas refused to fund the construction of Nethergarde Keep, leading to the departure of Gilneas and its military from the Alliance, and the construction of the Greymane Wall. This ended all contact with the other Alliance nations, and closed off the nation from the rest of the world.

The Gilnean military was eventually attacked by the worgen summoned to aid them.

During the Third War, Gilneas' military remained stationed at the Greymane Wall. There, they fought against the Scourge after it had destroyed their neighbor of Lordaeron. Though the Scourge could not initially penetrate the wall, the Gilnean military was unable to repel the Scourge on their own. Archmage Arugal proposed to King Greymane a summoning spell, which would invoke lupine creatures known as the worgen into their service. Despite many generals advising Greymane against it, the worgen were summoned.[7]

In addition to the Wall, a group known as the Gilneas Brigade was sent to aid Lady Jaina Proudmoore across the sea in Kalimdor. This group was sent outside of the permission of King Greymane, and instead, by Darius Crowley; a Gilnean lord who had disagreed with Genn numerous times since the construction of the wall, and an advocate of the Alliance.

The Gilnean military fought against the rebels during the Northgate Rebellion. Despite this, Crowley managed to still set Gilneas City on fire during one of his attacks.[8] They later captured Crowley and his men, imprisoning them within Stoneward Prison, ending the rebellion. 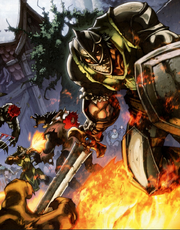 The City Guard fights off the worgen.

Prior to the destruction of the Greymane Wall, the worgen attacked Gilneas City en masse, swarming it under the leadership of Alpha Prime.[9] During this time, the Royal Guard and the Gilneas City guards were rallied under the leadership of King Greymane and Prince Liam Greymane, later joined by the freed Darius Crowley and his Northgate rebels. Many of the guards were wounded or slain, eventually having to start killing the very civilians they were protecting as they turned into the worgen themselves.

Following the Cataclysm, caused by the re-emergence of Deathwing, the earthquakes destroyed the Greymane Wall and allowed the Forsaken a way into the kingdom; as well as having destroyed the reefs that protected the kingdom.[10] During the initial breach, the military had managed to hold off the Forsaken's advance, despite the presence of Garrosh Hellscream; who desired the area as a port for the Horde in northern Eastern Kingdoms. They fought with muskets, burning oil and flaming arrows, as well as having several of the recently cured worgen, by way of alchemy, on the walls aiding them. Because of this, the Wall, despite being destroyed, held.

Following the continued lapse in the Gilnean countryside to the worgen, the Cataclysm destroying the southern portion of Gilneas, and eventually the Forsaken's inclusion, the wall was eventually breached, either by the military retreating or having been destroyed by the Forsaken. Following the defeat of the Horde and the crashing of a Horde Gunship into the Forsaken Forward Command, whatever remained of Gilneas' fighting forces regrouped under Darius Crowley, forming the Gilneas Liberation Front. During this time, Genn Greymane and the remaining civilians of Gilneas were evacuated to Darnassus, and later petitioned to rejoin the Alliance.

When Genn Greymane and the representatives from Gilneas met with the delegates from the Alliance, it was decided to make a show of power so that the Alliance would recognize Gilneas as a formidable ally, rather than a drain on the Alliance. As a result, the Gilnean military marched in formation with Genn Greymane, carrying the banner of Gilneas and playing the Gilnean anthem. They had, despite Gilneas' beleaguered state, made a point of matching the amount of forces sent by the Stormwind army during this encounter. They capstoned this display by having the Gilneans in procession transform into Worgen as Greymane spoke about the benefits of bringing Gilneas into the Alliance's fold.[11] Soldiers under Eadrik would later join Jarod Shadowsong as they attempted to discover the culprit of the Highborne assassinations in Darnassus, though Eadrik was slain saving Jarod's life from Neva, who was later killed in turn to avenge Eadrik.

When the Horde marched into Ashenvale under Garrosh Hellscream, with several magnataur under their command, the Gilnean forces attacked the magnataur en masse to aid Varian Wrynn. [12]

After this, the Liberation Front continued their fight in Gilneas and beyond under Crowley, eventually recruiting the refugees of Hillsbrad Foothills, transforming them into worgen, and the Bloodfang Pack, led by Ivar Bloodfang. They would later receive aide from Stormwind now that Gilneas had rejoined the Alliance in the form of Halford Wyrmbane, whose forces landed in Keel Harbor, liberated Gilneas City, and marched beyond the wall into Silverpine Forest. Together, the groups wreaked havoc across Silverpine, before being forced to retreat after the capture of Lorna Crowley. While this soured relations with the Bloodfang Pack, the groups continued to work together. The Liberation front was also active on the coast of the Northern Headlands, attempting to rebuild a holding for Gilneas from attackers by the sea.[13]

Gilnean soldiers were found guarding the mine in Ashran accompanied by a warhound.

A Royal Guard in worgen form during the Battle for the Broken Shore.

Gilneas fielded soldiers under the command of their king at the Broken Shore, where Gilnean Royal Guards made the bulk of their representation. After the death of Varian Wrynn, Gilneas was the main presence on the Broken Isles for the Alliance; serving under the banner of the Gilneas Brigade. There, they combated the Forsaken in various fronts, such as destroying their fleet, fighting the Queensguard at Warden Towers, stopping Sylvanas from corrupting Eyir using the Soulcage, and established the base of Greywatch in Stormheim.

They also represented the Alliance in Dalaran, having taken over the Silver Enclave and renamed it to the Greyfang Enclave.

Gilneas was present at the Battle for Lordaeron, where Gilnean Maulers, cannons, and Knight-Captain Emery represented their troops. Genn Greymane led the charge alongside Anduin Wrynn, acting as one of the on-field generals. Following the battle, Gilneas' military returned to their kingdom under Darius Crowley, leading an assault on the Sludge Fields, which were preparing an army of their own to attack Gilneas.[14][15]

They later were deployed to Darkshore, by orders of Greymane, to assist the kaldorei and show them they had not been abandoned by the Alliance. There, they were led by Princess Tess Greymane and Commander Lorna Crowley.

Later on, the forces of Gilneas deployed Gilnean Ambushers to aid with a suicide mission in Nazmir, led by Blademaster Telaamon, to distract the Horde from forces heading for Zuldazar. They broke off from the group alongside night elf sentinels at the Zul'jan Ruins. During the Battle of Dazar'alor, King Genn deployed Gilnean soldiers into the field, the king himself leading the strike team against King Rastakhan alongside Mathias Shaw of the SI:7. Gilnean footmen faced off against orc grunts and their Zandalari allies at the Port of Zandalar. They fought alongside Stormwindian footmen and dwarven riflemen. 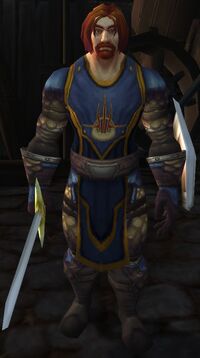 Sergeant Cleese, a member of the armed forces, wearing the armor that most basic Gilnean soldiers wear.

The Gilnean military, in the majority of its appearances, shares its basic footman appearance with that of the Gilneas City Guard's armor. This is depicted in the Curse of the Worgen comics, though it is inaccurately given a green color scheme. This color scheme is referential to an original design for Gilneas that was in the early Cataclysm beta, but was changed before release, thus leading to a mix of the two appearances. This armor is also worn by the Gilnean Royal Guard in most appearances.

The Gilnean military differs from that of the other human nations by deploying less knights and mages, but more riflemen, cannons and druids. From their appearance in Darkshore, their footmen have been upgraded to using the Aspirant's version of the Dread Gladiator armor.

They are often accompanied by mastiffs, either as hunting hounds or as wardogs. A Lost Gilnean Wardog can be found wandering Silverpine Forest as a rare mob.

Marshal Gabriel alongside the Stormshield Knights that appear in Warlords of Draenor may have been Gilneans, as they use the voice files (the latter using more than just simple poke quotes) for Gilnean humans.