This article is about the in-game faction. For the human kingdom, see Gilneas (kingdom). For other uses, see Gilneas (disambiguation). 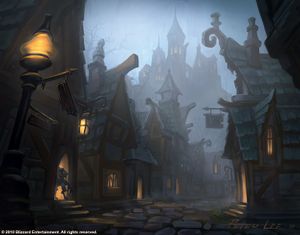 The streets of Gilneas City.

The people of Gilneas are a nation of survivors. Having walled themselves off from the rest of humanity, they now face threats from neighboring lands as well as from within, which quickly threaten to tear their kingdom apart.

After finally fleeing from their ravaged homeland, the proud Gilneans have settled in with the Night elves of Darnassus. Having mastered the curse that overtook Gilneas, they have gained the ability to transform into worgen form at will. Their leader, King Genn Greymane, currently resides in Stormwind Keep, within Stormwind City. There, he acts as one of King Anduin Wrynn's primary advisers. As of Battle for Azeroth, Gilneas has been reclaimed in some capacity.

The zones of Duskwood, Felwood, Stonetalon Mountains, Blasted Lands, and Shadowfang Keep offer some quests for gaining reputation with Gilneas. 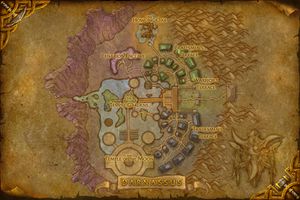 , located in the Temple Gardens of Darnassus beside the Darnassus flight point. At all reputation levels he sells the

[Gilneas Tabard], which can be used to champion Gilneas.

Exalted with Gilneas is one of the requirements for achieving the title of Alliance Ambassador.

outside the Howling Oak in Darnassus. A brown horse is available starting at level 20, with a black horse available at level 40.