This article is about the modern brigade. For the brigade that fought during the Third War, see Gilneas Brigade (Warcraft III).

The Gilneas Brigade is one army of the Alliance in the Broken Isles, moving against the Burning Legion and Sylvanas Windrunner's forces under King Genn Greymane's command. The army comprises of Gilneans, both human and worgen, though are seen with dwarven aid in Stormheim.

Whether this Brigade has any connection to the one from the Third War is unclear. 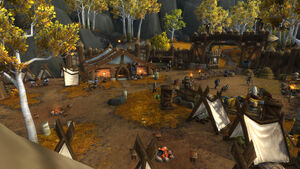 Greywatch, the Brigade's encampment in Stormheim.

The Gilneas Brigade established Greywatch to secure Stormheim from threats. Lorna Crowley is a members of the contemporary Gilneas Brigade. Word reaches the Gilneas Brigade of Sylvanas' intentions to sail for Stormheim, which causes King Greymane to become an attache to a 7th Legion deployment upon the Skyfire.[1]

Lorna fought alongside King Greymane on the Skyfire as they assaulted Sylvanas' fleet and brought Alliance reinforcements to the Broken Isles. At Stormheim, Lorna would lead Gilneas Brigade scouts and aid Greymane's mercenaries in undergoing the various ancient trials necessary to obtain the

[Aegis of Aggramar]. Eventually, the Gilneas Brigade uncovers that the Forsaken means to plague Greywatch like they did Gilneas. Greymane commands his forces to destroy the plague caches and the invading Forsaken apothecary to secure Greywatch and later sends Lorna to uncover what Sylvanas seeks in Skold-Ashil. As Lorna discovers that Sylvanas means to create more Val'kyr by subjugating Eyir, Genn musters the Alliance fleet in trying to assault Dreadwake's Landing. The battle at Greymane's Offensive goes poorly and his offensive is repelled. After hearing news of Lorna's intelligence, Genn personally goes to the vault in Skold-Ashil and prevents Sylvanas from subjugating Eyir.[2]

Following this, the Gilneas Brigade deploys across the Broken Isles, contesting Warden Towers against the Queensguard, going back and forth over control and attack of each tower. During the Legion Invasions of Val'sharah, it is possible that the garrison at Starstalker's Point is over run by the Legion and slain.

The Brigade continued activity following the downfall of the Legion, establishing a base camp in Drustvar, led by Marshal Layre. The encampment was later attacked by the Horde, seeking to drive the brigade out.[3] 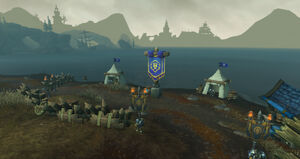 The Brigade's appearance in Battle for Azeroth along the Brackish Coast.