Gilneas City (or the Ruins of Gilneas City[3] and simply Gilneas) was the capital city of the kingdom of Gilneas located in the peninsula of the same name. It was a dark and foreboding place of narrow cobblestone streets and crowded, Gothic houses, divided into four districts, centered around the Light's Dawn Cathedral. Shortly after the Cataclysm, the city was struck by a worgen assault and, later, a Forsaken invasion. After its abandonment by the Gilneans, the Alliance initially managed to retake the city, although it was ultimately left ruined and abandoned.[2] 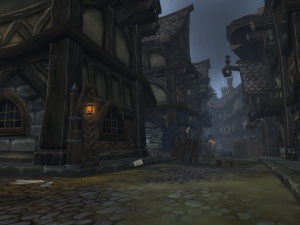 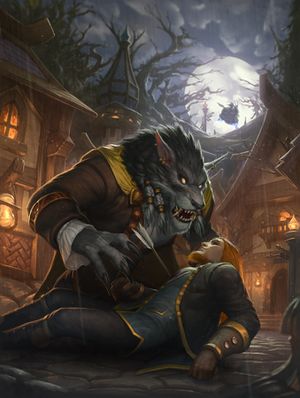 In dissatisfaction about the Greymane Wall, Darius Crowley started a rebellion that quickly spread trough the kingdom. Soon, his Northgate Rebels marched onto the city itself.[4] The final battle erupted when Crowley's men marched upon the city, setting it ablaze with cannon fire. Yet Crowley's coup d'etat eventually failed and he, as well as the other leaders of the rebellion, were imprisoned for treason.[5] Following Crowley's capture, the rebels went into hiding. The rebels had stashed weapons throughout Gilneas, including a large cache in the city.[6] Though the Northgate Rebels had enough firepower to take out half of Gilneas City, with Crowley's imprisonment, the rebellion came to an end and the weapon caches never saw use until a new threat arose.

Not long after calm had returned to the city, the worgen began terrorizing the forests of Gilneas. Not wanting to scare his people following the end of the civil war and the fragile state Gilneas found itself in, Greymane and several other nobles began hunting down and killing these wolf men.[7] The worgen lurked throughout Gilneas for years, isolating the Gilnean harbor towns from support from the rest of the kingdom.[8] Eventually the worgen amassed and assaulted Gilneas City in a massive invasion. Unable to withstand the invasion alone, the Gilnean people reunited at last. Darius Crowley and his Northgate Rebels were freed from prison under Greymane's orders; the two forces combining to combat their common foe.[9] In the end, Crowley, several volunteers, and a majority of the Northgate Rebels had opted to make one final stand against the worgen within Light's Dawn Cathedral as the Gilnean civilians evacuated to Duskhaven.[10][11]

Some time later, the Gilnean forces under the command of Liam Greymane fought their way through Gilneas City, destroying Forsaken forces positioned there. Soon they were attacked by a large number of abominations, however, the villagers of Emberstone brought powder cannons that helped in defeating them. After Liam's forces met and united with Lord Crowley's worgen forces around Stoneward Prison, the Forsaken unleashed upon the Gilneans one of their most powerful creations - the flesh beast known as Gorerot. However, the Gilneans took control of Forsaken catapults and used them to take down Gorerot quickly. Soon Liam and Crowley caught Sylvanas herself at the Greymane Court, while his father came and attacked from the other side. As the tide was turning against Sylvanas, she used her dark powers to stun every one in the immediate area and aimed a poisoned arrow at Genn Greymane. Liam jumped in front of the bowshot, saving his father from certain doom. As Sylvanas fled the scene, Liam died with the knowledge that the city had been freed from Forsaken control.[12]

After the Gilneans were forced to abandon the city and escape to Darnassus, the Forsaken claimed the city for their own. However, with the aid of the 7th Legion, the Alliance was able to retake the city. During this moment of time, the Cathedral Quarter in front of the Light's Dawn Cathedral was filled with 7th Legion Submariners led by Master Sergeant Pietro Zaren. The 7th Legion placed a telescope near the water to spy on the Forsaken Forward Command. The city itself was covered in burning debris from attacks during the several battles taken place here, and the Stoneward Prison courtyard still held the remains of the abomination creation lab from its initial capture. After the Silverpine quest chain is completed, Gilneas City remains in Alliance hands; the Forsaken did not push forward into Gilneas following Godfrey's betrayal, as Sylvanas was too weak to lead after being resurrected.

At the conclusion of the Silverpine Forest battles between the Gilneas Liberation Front and the Forsaken, Darius Crowley surrendered the city to the Forsaken in order to save his daughter Lorna. Darius, his daugher, and the remaining Gilneans fled toward Gilneas and escaped.[13]

It was later revealed that Lord Hiram Creed, leader of the Blackhowl, rules over over most of the Gilneans in the area. In reality, Creed was a black dragon disguised as a Gilnean nobleman. He and his Blackhowl servants occupied much of Gilneas City, having taken out several Forsaken assassination attempts on him. He had apparently used his own draconic blood to further the Blackhowl's obedience and skills. It is likely that the Blackhowl had been working with the Alliance, albeit possibly with the intention to betray them later on as no one had known of Creed's true form within the Alliance ranks. With his assassination, it is unknown what becomes of the Blackhowl group. It's likely they simply continued to live with their Gilnean brethren of the Alliance without draconic manipulation, assuming they were even aware of it to begin with.

It has since become abandoned and was left ruined. 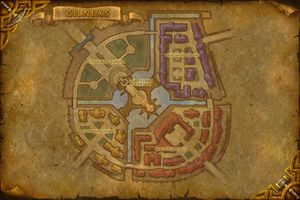 Gilneas City is arranged in a few areas: