The Gilneas Liberation Front is the main Gilnean resistance group fighting against the Forsaken invasion of their nation. It was formed following the invasion of Gilneas at the time of the Cataclysm, and is made up of worgen and human soldiers who chose to remain behind after the evacuation of most of Gilneas's citizenry.

Led by Lord Darius Crowley, the front's main objective is to defend Gilneas from the Forsaken and their Horde allies, and also to take back Lordaeron for the Alliance. In this effort, they have since enlisted the aid of several other like-minded groups, including the Hillsbrad humans, the 7th Legion, and the Bloodfang Pack.

The origins of the Gilneas Liberation Front can be traced back to the Forsaken Invasion of Gilneas at the time of the Cataclysm. The upheaval caused by the Cataclysm would shatter the Greymane Wall and, coupled with the new outbreak of the worgen curse, saw the kingdom of Gilneas descend into chaos. The subsequent attack by the Forsaken overwhelmed Gilneas's defenders and caused most of the population to evacuate the peninsula. Those who remained behind, under Lord Darius Crowley, remained determined to hold what was left of their kingdom against the Horde. 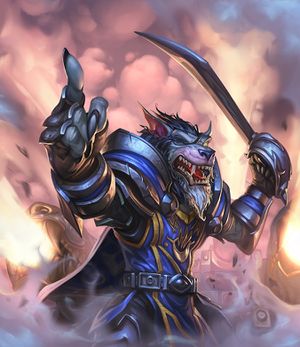 Though they secured major gains during the opening stages of their invasion, the Forsaken army eventually began to meet serious resistance in Gilneas and the neighboring Silverpine Forest. In their new quest to drive the undead from their lands, the Gilneas Liberation Front expertly mobilized its forces in a large campaign. Silverpine Forest would become a central battlefield, as the Gilneas Liberation Front began taking control of nearby farmholds and causing havoc amongst the Forsaken roads and supply lines.

Darius Crowley soon made an alliance with the Bloodfang Pack, a faction made up of the remaining worgen of Silverpine following the Forsaken crusade against them. These devastating new allies outmatched the Forsaken, making use of unorthodox guerrilla warfare tactics and devious traps to great effect. Sylvanas Windrunner and her troops were taken off-guard by these strategies, which had never before been adopted by Alliance forces in such a way.[1]

At this point, the Gilneas Liberation Front had cut off the Forsaken armies in Gilneas itself from their main force in Silverpine, allowing them to decimate the surrounded undead. Despite the setbacks, the Forsaken in Silverpine slowly but surely carved through the opposition (which became bolstered by newly-turned worgen from Hillsbrad) as they attempted to reach their stranded troops in Gilneas. Before the Forsaken arrived in the southern reaches of Silverpine Forest, the Gilneas Liberation Front were able to seize Pyrewood Village as a defensive position. Sylvanas's forces were subsequently able to retake the village in their advance, though at cost and in the face of fierce resistance.

The Gilneas Liberation Front had failed to prevent the two Forsaken fronts from reuniting, but they now unleashed another advantage on their opponents. A detachment of Stormwind's 7th Legion arrived in Gilneas harbor with the intention of bolstering the worgen offensive. Having amassed their forces, the Gilneas Liberation Front and their allies launched a withering attack on the weakened Forsaken stationed on the Gilnean side of the Greymane Wall. Though the assault was resisted with determination, the undead garrison was completely overwhelmed. While some managed to escape back through the Greymane Wall, those who did not were slaughtered. All occupying forces had now been fully driven from the peninsula and back into Silverpine Forest.

Although the tables had now tipped in the Gilneas Liberation Front's favor, the newly-raised Gilnean traitors (now Forsaken) in the forms of Lord Godfrey, Baron Ashbury, and Lord Walden changed the playing field. The worgen and 7th Legion pressed their advantage by pushing past the Greymane Wall, once again occupying Pyrewood Village. Under Lord Godfrey's leadership, however, the Forsaken now waged a truly ruthless campaign, going as far as to burn Pyrewood once it had been lost.[2] Further undead successes began to cripple the Gilneas Liberation Front's support base, while the capture of Gilnean Commander Lorna Crowley proved a major blow.[3] 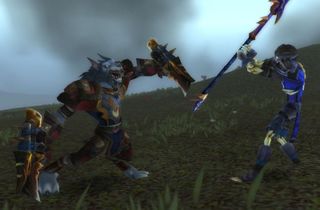 With the Forsaken ejected from Gilneas proper, the Gilneas Liberation Front, Bloodfang and Hillsbrad worgen, and the 7th Legion continued their advance by marching further into southern Silverpine Forest. There, they came head-to-head with the Forsaken army, which was now itself reinforced with newly reanimated mages from Ambermill, as well as orc marines arrived by sea. The ensuing battle proceeded with heavy casualties on both sides.[4]

A breaking point would eventually come when Sylvanas Windrunner used Lorna Crowley as a bargaining chip. Lorna was not herself a worgen, and could thus be raised as undead. Unless Sylvanas's ultimatum was accepted and the Alliance pulled out of Silverpine, she threatened coldly to make the girl one of the Forsaken. Unable to watch this fate befall his daughter, Darius Crowley ordered the retreat[4] and surrendered Gilneas City to the Forsaken. Darius, Lorna, and the remaining Gilneans fled towards Gilneas and escaped,[5] leaving the Bloodfang Pack in the contested areas of Gilneas.[6] Following this, no further actions of the Gilneas Liberation Front are known.

Tabard of the Gilneas Liberation Front