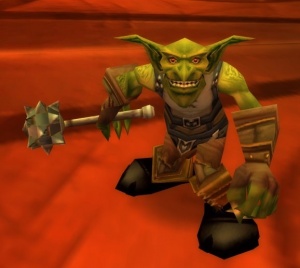 Gilnid <The Smelter> was a level 20 elite goblin in The Deadmines. Gilnid was the head smelter for Edwin VanCleef.

When Jerias Bloodvein invaded the Deadmines, he was killed by James Blackridge.[1]

In the crafting of technological automatons, Gilnid may have had no equal. Amoral beyond the ability of the goblins to stomach, Gilnid was cast out of Booty Bay when his insane experiments ran amok in the city’s marketplace. Gilnid had no interest in politics, and played no part in the Brotherhood’s decision making, but the Brotherhood funded his experiments and kept him supplied with parts. VanCleef had enormous — perhaps too much — respect for his mad talents.[2]

Getting through the forge to Gilnid was harder than the actual fight with him. Most of the mobs around him could be pulled separately, usually leaving only one near him. The fight was fairly straightforward.