This article is about general information on gladiators. For the Maldraxxi race, see Maldraxxus gladiator. For the alternate Nagrand NPCs, see Gladiator (Nagrand). For the title, see

[Gladiator]. For the achievement, see 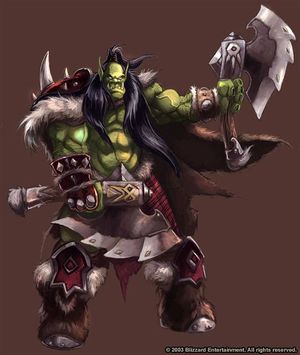 Gladiators (or pitfighters) are combatants forced to fight in arenas or pits. They use morningstars, halberds and trap-nets. Many slaves and prisoners are forced into gladiatorial fights.

During the early decades of the Age of Order, a sly ogre chieftain decreed that disputes in his clan would be settled via proxy in one-on-one combat between gladiator slaves. The mortality rate amongst the ogres plummeted, leading to a golden age of expansion.[1]

Two most iconic characters of Azeroth were gladiators during their enslavement, Thrall and Varian Wrynn. Kargath Bladefist is a famous gladiator of Highmaul Coliseum who led a revolt against the ogres from the Gorian Empire and formed the Shattered Hand clan from former orc gladiator champions.[2]

The Crimson Ring and Brawler's Guild are gladiatorial organizations. The demonic group called the Champions of Draenor operate on a floating ruin of Draenor, known as the Outland Arena.

Gordunni clan of Dire Maul enslaved murlocs and other individuals to fight in their gladiatorial fights for pleasure.[3]

The ogre Stonemaul clan on the alternate Draenor captured several individuals from various races and forced them to fight in the arena.

Prince Oceanus in Oceanus Cove of Azsuna on the Broken Isles had gladiator slaves some of whom revolted.

A gladiator has devoted himself to the mastery of close combat. This single-minded devotion to weaponry and fighting styles makes him much feared by his enemies who cross him, and close allies to those who manage to befriend him. A gladiator prides himself on having equal proficiency over every weapon imaginable. Most also strive to become peerless experts in a weapon of their choice. This chosen weapon weaves and sings in the gladiator's hand, carving a swath through all foes.

Most gladiators come from the ranks of fighters, warriors, or barbarians, who find the discipline and rigors of training a welcome challenge to master. Other classes require much more work to become a true gladiator.

Among the Horde, gladiators are known as blademasters.[4][5]