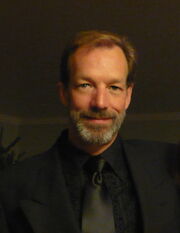 Glenn Stafford is a Senior Composer for Blizzard Entertainment.[1] Derek Duke, Jason Hayes and him were the original music team for StarCraft.[2]

Growing up, Stafford studied classical music, from which he gets a lot of his inspiration.[3] Stafford's background lies in contemporary and progressive rock.[4] He was initially hired by Blizzard on a one-week trial basis. He spent that first week stationed in Mike Morhaime's office, porting music and sound effects for the PC version of The Lost Vikings.[5] He later created the music for various games in the Warcraft franchise, including Warcraft II: Tides of Darkness and Warcraft II: Beyond the Dark Portal,[6] Warcraft III: The Frozen Throne and World of Warcraft as well as several of its expansion packs.