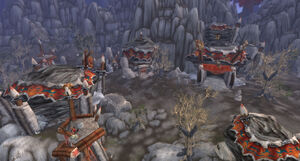 The Glopgut is a group of ogres at Glopgut's Hollow within the Twilight Highlands. They are led by Brogg Glopgut and Thog.

After antagonizing the Thundermars for years,[1] they kidnap Fanny Thundermar[2] who frees herself during a raid to rescue her by killing her captors with her bare hands.[3] They also used to cause many problems to the inhabitans of Humboldt's Stead before the town was destroyed by the Twilight's Hammer.[4]

[The Light of Souls] as a gift to root out infiltrators, though it seems to have been used as a nightlight.[6] Perhaps ironically, the ogres were attacked by a member of the Horde disguised as a member of the Twilight's Hammer, probably starting conflict between the two groups.[7]