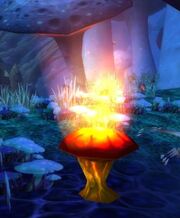 Glowcaps are a traditional currency among sporelings, which can be found all over

Zangarmarsh. They appear as large red glowing mushrooms. They are used to buy the reputation rewards from Mycah, the Sporeggar Quartermaster, once you become neutral to the Sporeggar.

(Herbalists used to be able see them on the minimap, though no longer as of patch 3.1.0.)

Besides on the ground players will also receive a Glowcap when they complete one of the following quests:

Between neutral and friendly with the Sporeggar faction, a Sporeggar named Msshi'fn will offer the following quests for Glowcaps:

Each quest turnin is worth 750 reputation and the quest is repeatable until 2999/3000 neutral.