Glubtok the Foreman is an ogre magi and the first boss of the Deadmines instance. 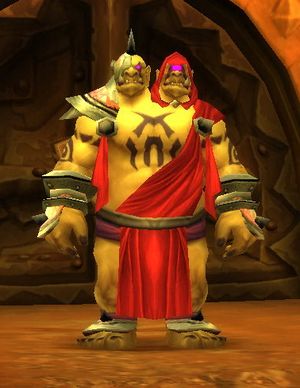 Glubtok in World of Warcraft.

He appears in a few quests in Westfall, and later shows up again as a boss of the Deadmines.

In a fit of rage, Glubtok unleashed his potent magical abilities and reduced his ogre mound to ash. Upon hearing of his destructive talents, the Defias hired the massive ogre mage to supervise their laborers as head foreman of the Deadmines.

Once Glubtok reaches half health, he will deep freeze the entire party and teleport to the center. He will then gain Arcane Power, causing him to float above the ground (still attackable by melee) and channel a spell causing him to shoot fire and frost at random locations, visibly marked. In this phase, the party needs to DPS him down while avoiding his attacks. He no longer melees and only uses the fire and frost abilities.

In phase 2, a wall of flame will appear and slowly rotate around the room, centered on Glubtok. It is easy to avoid, but everyone must pay attention to it as touching it will deal massive damage to any party member. Also, Fire Blossoms and Frost Blossoms will spawn near where ever one of the spells of the same name landed. You should get rid of them as soon as possible as a lot of these adds will sum up to a lot of damage. It is a good idea for everyone to get together as phase 2 starts, because the tank cannot cross the fire wall to protect party members once it is up, and all adds that have been aggroed by the tank will be hit by any AoE spells the players cast. 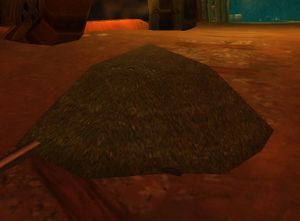 Fists of Flame
Fists of flame!

Fists of Frost
Fists of frost!

Defeated
TOO...MUCH...POWER!!!
Glubtok is obliterated by the arcane energies into a pile of ash.