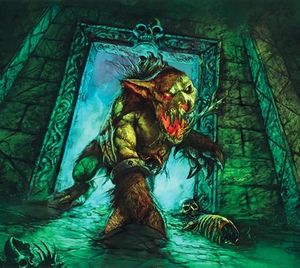 Gluth in the TCG 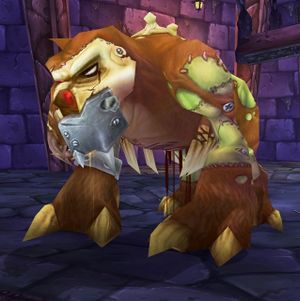 Gluth in World of Warcraft

"Gluth, the foul plague-dog of Naxxramas, was said to have an appetite so voracious that even the living were not enough to satisfy his hunger. Feugen was said to feed him an army of zombies daily, recycling the remains of undead too weak to use in combat."
- Commander Eligor Dawnbringer

Gluth is the third boss of the Construct Quarter in Naxxramas.

Reduces the effectiveness of healing spells by 10% for 15 seconds. Stacks. This debuff is applied to Gluth's target approximately every 10 seconds.

Reduce the current health of all nearby units (friendly or enemy) to 5% of their maximum health. Affects both players and zombies. Used approximately every 90 seconds.

Zombie Chows have 1,000,000 hit points each. Two will spawn every 10 seconds from the grates near where you jump out of the pipe into Gluth's lair. These move at run speed. Vulnerable to all snares and roots.

When Zombie Chows are hit by decimate they will immediately stop attacking and run towards Gluth. Should be rooted and AoE'd down. They will have approximately 50,000 hit points at this stage.

Zombie Chows have approximately 500,000 hit points each. One will spawn every ~10 seconds from the grates near where you jump out of the pipe into Gluth's lair. These move at run speed. Vulnerable to all snares and roots.

When Zombie Chows are hit by Decimate they will immediately stop attacking and run towards Gluth. Should be rooted and AoE'd down. They will have approximately 25,000 hit points at this stage.

Gluth is one of the more difficult encounters in the instance from an execution standpoint. You will want two tanks and a kiting class. Paladins often work best with holy wrath for bad situations, plate armour and consecrate/taunt (any spec though protection is best). Most classes CAN kite the chow however. All that is required is maintaining aggro on the chow and running them around whatever slow effects are used.

The main tank should run up the pipe first, pick up Gluth and drag him all the way to the far door so as to avoid the Zombie Chow. Warriors are ideal as they can berserker rage to avoid Gluth's terrifying roar. The two tanks should taunt Gluth off each other every 15 seconds to mitigate the effects of mortal wound.

Zombie Chows will spawn constantly in the back of the room near the pipe from the grates. The ranged DPS and healers should stack up on each other ~30 yards from Gluth to aid the Paladin in kiting the zombies. The paladin should drop consecration on the stacked raid as often as possible while kiting the zombies around the back of the room in order to gain aggro on the Zombie Chow who should make straight for the healers. The Paladin cannot kite the zombies alone however, you will need assistance in slowing the adds:

Given that most of the above abilities have a coolown, it will probably be necessary to use a combination of methods. The paladin will need a dedicated healer.

As soon as Gluth casts Decimate, you will have a few seconds to heal the current tank before Gluth kills him. All of the zombies in the room will stop attacking and make straight for Gluth, the entire raid MUST slow, root, snare, stun and above all kill all of them before they reach Gluth. Use whatever AoE abilities you have.

Keep this up for a few decimates and Gluth should be dead.

Contrary to the tactics for 25-man, you do NOT need a paladin to help with the adds. Our guild discovered after our 2nd wipe (using a hunter for the 1st 2 tries) that our mage would be better.

Drop into the room, in order, main tank, off tank, healers, DPS then kiter. Have your main tank pull the boss to the door at the far end of the room. Gluth will likely aggro before the Main Tank leaves the pipe, if you are the Main Tank wait to use any abilities on him until after you hit the floor as he may evade until he is able to attack you.

Tanking this encounter requires switching, and if vent is not available, make a macro with a Raid Warning "Tank Switch" when the stacks get too high. Depending on your tanks, either have the main tank holding Gluth as much as possible, or your two tanks switching at regular intervals. In the first cast, once the MT has Mortal Wound stacked to 3 debuffs, the OT should taunt and hold Gluth for up to 15 seconds while the debuff stack expires on the main tank. In the second case, just have your two tanks taunt every time the debuff stack expires. As long as the debuffs are not stacked too high, Gluth's melee is easy to heal through.

If one of the tanks in your group is a tankadin, it may be best to allow them to kite the Zombie Chow. If you do this, a DPS-specced death knight, druid, paladin, or warrior, or as a last resort a healing-specced druid or paladin, can off-tank Gluth without too much problem. Have them wear as much tanking gear as possible — although paladins and warriors can probably just sword & board while druids should stack as much health as they can and be in Dire Bear form and all three will be fine — and make sure that your main tank taunts as soon as their Mortal Wound debuff stack expires. Depending on your healers, you will want the Main Tank to allow Mortal Wound to stack 2 or 3 times, then have the DPS/healing-spec character taunt before the next Mortal Wound is applied to the stack. With a boss warning mod such as BigWigs or DBM it should be fairly easy to make sure that the MT is holding aggro on Gluth whenever a Decimate is about to land.

Tank positioning doesn't matter particularly, but if your healers are not used to this fight it can be a good idea to position the OT behind or to the side of Gluth. After the off-tank taunts, Gluth will turn around, so the healers have a visual aid for the tank switch. The off-tank should then run through Gluth and stand next to the MT. Experienced groups can just stack the tanks next to each other at the door for the entire encounter. Healers must be very careful immediately after the Decimate. They must heal Gluth's target to over 10k health as quickly as possible after it occurs. If Gluth's current tank has any Mortal Wounds stacked on them at this point, it may be more efficient to heal the other tank to full and have them taunt, otherwise continue healing the current tank to full and proceed as normal. Healers should not bother healing the rest of the raid until both tanks are topped off, as all Zombie Chow drop aggro and move toward Gluth as soon as Decimate hits.

The trickiest part of this encounter is the Zombie Chow. As stated above, they spawn from the grates periodically. In the 10man you only need one kiter, and the most effective is a frost mage — if they are willing, have a fire or arcane mage re-spec for this encounter. Keep the chow as far away from the boss as possible, to avoid devouring, and use all slow/stun moves to aid the kiter. Do not allow Chow to reach Gluth, as he will be healed for 5% of his total health for each Zombie Chow he consumes.

Don't try to kill the Zombie Chow until after a Decimate. Even on normal, they have 500k health and there is usually 5-10 up at a time, and if a raid can do that much aoe damage they shouldn't be focusing on the chow.

After Decimate have your mage use whatever shield he/she has access to and use frost nova, the rest of the dps should then run in and Aoe the chow. In the case of starter raids (slightly undergeared) divert all DPS onto the Chow, leaving just the tank and Off tank on the boss. We found using 2Death knights and a hunter was sufficient to kill the chows before the frost nova broke.

One of the hardest things for new groups is actually beating Gluth's enrage timer, once the mage has got the kiting perfected, you need to focus on maxing dps. Soft cooldowns (anything which resets in 3mins or less) should be used on entry, with heavy cools like bloodlust, being saved.

There seems to be a fault with the Deadly Boss Mods enrage timer, where enrage does not happen until 32 seconds after the mod declares it.

With your mage busy with the adds and your hunter/ ranged dps switching back and forth, you are heavily reliant on good melee dps to bring down gluth. Shaman totems to enhance melee damage, warrior shouts/ paladin blessings and death knights "horn of winter" should be kept up at all times, Gulth has approximately 3 million health (assuming that your kiter lets a few chow through) so your dps needs to max out damage as often as possible.

After the 3rd decimate, roughly 4-5 mins in, you need to use all your cool downs, soft cool downs will have refreshed, and big cool downs like bloodlust should be used. Gluth should be at approximately 25-35% health. If he isn't, chances are you will not beat the enrage timer.

This is the point where you burn your mana, healers should be running low, so top off the tank and use whatever you've got to do some extra boss damage, before using your "shadowfiend"-type move. If Gluth does not die before the next decimate, you will inevitably wipe at the decimate, because the chow will be piling up and your mages will be oom. Have your dedicated healer leave the mage and apply some last min DPS on the boss. If he is below 5% at the next decimate, leave the adds alone, focus your fire and kill the boss, slowing not slaying the adds.

Alternate strategy: Actually, you can tank the adds. We did it with a feral druid with about 32k health&armor, 35% dodge (unbuffed). The tanking requires a lot less skill but more gear, and is demanding to the healers. 3 healers, with one concentrating on the add tank and one of the others switching to add tank when decimate is coming close. It is a bit demanding on the healers, but doable. A little bonus effect is that there will not be any stray adds, they are trivial to pick up when tanking, so DPS can concentrate better on Gluth. If kiting just keeps failing try tanking.

Alternate strategy 2: When your raid is overgeared or your dps are just doing a good job (~2,7k each) you can simply tank him where he stands at the beginning and ignore all the adds. You will deal more damage than he can heal and he won't ever use decimate. So it will be just tank and spank with taunting. With this strategy you need only one healer so one can change specc to dps.

Again, after the gear check that is Patchwerk, Gluth will not be threatening. Run through the tunnel, jump down, and nuke the plague dog where it stands. The healing from the zombies will not cause problems.