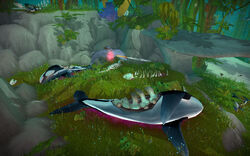 is a small area in eastern Kelp'thar Forest where Gnaws brings his prey. It is also here that he makes his final resting place.

The orca is considered the only natural enemy of the great white shark. That this boneyard is littered with their remains of the Azerothian version might be intended to emphasize Gnaws' power and ferocity.