The Gnoll War[1] was a major conflict fought between the relatively young and small Kingdom of Stormwind, and an unusually unified faction of gnoll packs, around 75 years prior to the opening of the Dark Portal. The war was the result of incursions by unified gnoll packs under Packlord Garfang into lands belonging to the Kingdom of Stormwind, mainly the regions of Westfall and Elwynn Forest. The war quickly turned into one of attrition, where the forces of Stormwind began to become overwhelmed by the sheer number of gnolls invading their lands. With uncharacteristic strategic thinking, the gnolls successfully pinned down the majority of human forces in and around the capital of Stormwind, leaving other regions, such as the bountiful Westfall, open to attack. As a result, a large portion of human towns and lands were vigorously pillaged during the course of the conflict.

The war dragged on until King Barathen Wrynn of Stormwind made a daring and desperate gamble in launching a small, elite assault on the relatively undefended base of Packlord Garfang in Redridge Mountains, where he succeeded in slaying the gnoll leader. This led to widespread infighting among the gnoll forces and a subsequent breakdown in the continuation of the war effort. With minor effort, King Barathen then successfully drove out the remaining gnolls, forcing them back deep into the Redridge Mountains. The outcome of the war successfully established the Kingdom of Stormwind as the dominant force in the mid-southern region of the Eastern Kingdoms.[2]

Following its founding in the southern region of the Eastern Kingdoms, the Kingdom of Stormwind, smaller and more isolated than the other human nations to the north, began to expand rapidly from Elwynn Forest through the neighbouring regions, including Westfall, the Redridge Mountains, and Brightwood (presently known as Duskwood). The humans of Stormwind subsequently began to develop these regions, creating many farmsteads and towns. Although this period was largely undisturbed by conflict, threats soon emerged to shatter this peace.

As the borders of the kingdom expanded, the humans eventually came into conflict with the packs of gnolls who also inhabited that part of the continent. Though they regularly launched vicious raids on human towns and convoys, the threat was kept under control through the deployment of heavily-armed groups of soldiers and knights, who would patrol and guard Stormwind's territories and frontier regions. Many of those initially displaced by the gnoll incursions found sanctuary and comfort in the kingdom's capital of Stormwind City, where a strong religious presence of priests and clerics began to provide spiritual closure to the kingdom and its citizens. Although any form of major bloodshed by the gnolls subsequently became very rare, their presence still represented a constant danger.

The kingdom under siege

During the reign of King Barathen Wrynn, however, the situation began to quickly spiral out of control. The frequency and severity of gnoll incursions began to increase dramatically, to the point where even the walled capital of Stormwind itself suffered attacks. Forces thus had to be pulled back from many of the kingdom's other regions to protect the heart of the nation in Elwynn. The consequences of this were most severe for those living in Westfall, which provided much of the grain that fed the kingdom. Without sufficient forces to protect it, packs of gnolls rampaged through Westfall, pillaging and destroying all that they came across, and razing many towns and settlements to the ground. Though costly, the gnolls continued to assault Stormwind in such numbers that few and fewer resources could be spared to combat the threat in Westfall.

The organization and tactical skill with which the gnolls prosecuted this war was highly unusual for their race, which generally adhered to a rigid structure of tribal packs and minor warlords. The reason for this strange, but highly successful, change in strategies was the result of the emergence of a new and intelligent leader among the gnolls. Packlord Garfang, alpha of the Redridge pack, had spent recent years steadily conquering packs in the surrounding regions, until he possessed an army of organised raiders, as well as the knowledge to use them effectively. Within a year of the first attack, it is said that almost a third of all human settlements belonging to the Kingdom of Stormwind had been raided. In response to the dire situation that he and his kingdom now faced, King Barathen sent emissaries to the other human kingdoms in the north, beseeching them for aid against the gnolls' onslaught. Despite the pleas, the other kingdoms refused to send assistance, seeing no benefit to aiding a rural and self-sufficient nation with whom they could not trade as a result, in addition to viewing Stormwind's spiritual tendencies as quaint and outdated. Thus, Stormwind would have to face the threat alone. Shocked and enraged by the refusal of the other human kingdoms to aid them, King Barathen decided on a bold course of action in order to quickly and decisively bring the war to a conclusion. 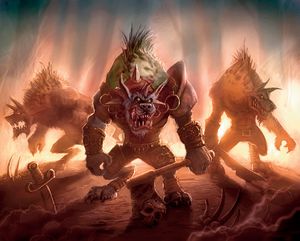 Under the cover of night, the king and a small party of elite, armoured knights set out from the city before the next assault on the walls. When the gnoll assault commenced, Barathen and his forces made their move, not towards, but away from the massing gnoll army. The group made speed towards the Redridge Mountains, where they discovered that king's gamble had paid off. As expected, Garfang had deployed all the forces at his disposal in the assault and, as such, left himself relatively undefended, with only a small unit of his personal guard. The human and gnoll troops battled for a day and a night before King Barathen himself personally sank his blade into the packlord's neck. Though over half his knights had been slain, and the rest wounded, King Barathen had successfully dealt a major blow to the gnoll forces. Upon learning of Garfang's demise, the majority of gnolls turned on each other, as numerous would-be packlords vied for supremacy, thinning their own numbers in the process. The infighting subsequently rendered the gnolls unable to launch any further large incursions against the kingdom. Pressing the advantage, King Barathen then proceeded to rally his forces and attacked the fragmented gnolls in Redridge, defeating and annihilating the vast majority of their remaining forces. Although groups of gnolls would remain active in the region, they would never again pose a threat to the kingdom itself.

Hailed as a hero, King Barathen, now being called 'King Barathen the Adamant', proceeded to lead Stormwind into an age of unrivaled economic, political, and social stability and prosperity, which lasted for several decades to come. Having rebuilt and repaired the parts of the nation destroyed by the war, the kingdom subsequently began to expand even further, occupying new territories and settling new regions. The great victory they had achieved — without the aid of others — further cemented a sense of independence and self-sufficiency among the citizens of the kingdom. As a result, Stormwind would continue to become even more distant from the other human nations, confident that they were capable of successfully dealing with any danger that arose to threaten their security; though this soon proved to be tragically over-optimistic.