This article is about the playable race. For the gnome lore, see Gnome. For the in-game faction, see Gnomeregan (faction).

The gnomes of Gnomeregan are one of the playable Alliance races in World of Warcraft. A brilliant race of inventors, the gnomes have enjoyed a friendship with their dwarven cousins for generations, with who they shared the subterranean spaces of Khaz Modan. However, their kingdom was lost to invasion and betrayal, and in recent years gnomes have lived in the halls of their allies. Prior to Cataclysm, the gnomes started their lives in Coldridge Valley, an area of Dun Morogh closed off by mountains. Currently, the gnomes instead start their adventures inside of their destroyed city, struggling to survive in a remade world.

The gnomes do not currently have a capital city, although they dream of the day that their beloved Gnomeregan will be fully reclaimed, and New Tinkertown serves as a main base to do just that. They ride Mechanostrider mounts and speak Gnomish as their main language, with Common as a secondary tongue. 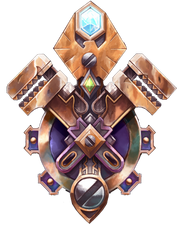 Though small in stature, the gnomes of Khaz Modan have used their great intellect to secure a place in history. Indeed, their subterranean kingdom, Gnomeregan, was once a marvel of steam-driven technology. Even so, due to a massive trogg invasion, the city was lost. Now its builders are vagabonds in the dwarven lands, aiding their allies as best they can.[1]

Though small in stature, the clever gnomes of Khaz Modan have used their great intellect to secure a place in history. Their subterranean kingdom of Gnomeregan is a marvel of steam-driven technology, and their skill at both engineering and the arcane arts has been a tremendous benefit to the Alliance across numerous campaigns.

Clever and eccentric, Gnomes are a race of tiny tinkerers, trailblazers, and technological geniuses, renowned for their intellect and radical ideas. Despite the destruction of their home city, they remain cheerful and ever-devoted to their work.[2]

The eccentric, often brilliant gnomes are held as one of the most peculiar races of the world. With their obsession for developing radical new technologies and constructing marvels of mind-bending engineering, it’s a wonder that any gnomes have survived to proliferate. Over the years, the gnomes have contributed ingenious weapons to aid the Grand Alliance in its fierce battles against the Horde. Thriving in the wondrous techno-city of Gnomeregan, the gnomes shared the resources of the forested peaks of Dun Morogh with their dwarven cousins for generations. Yet recently, a barbaric menace rose up from the bowels of the earth and invaded Gnomeregan. Aided by their dwarven allies, the gnomes fought a valiant battle to save their beloved city. Nevertheless, Gnomeregan was irrelevantly lost. The surviving gnomes flew to the safety of the dwarf stronghold of Ironforge. There they remained; devising strategies to retake their city. As a gnome of proud stand, it falls to you to answer the challenge and lead your curious people to a brighter future.

Given the recent political upheaval in Ironforge, the gnomes have suddenly found themselves unwelcomed guests within the city. Leveraging their ingenious technologies and unquenchable spirit for adventure, the gnomes have begun to reevaluate their role within Khaz Modan. Under the inventive leadership of High Tinker Gelbin Mekkatorque, the gnomes now plan a daring campaign against the barbarous troggs to retake their former capital of Gnomeregan. With the odds stacked against them, the gnomes are counting on brave heroes such as you to stand and be counted. Your people's greatest hour draws near.

The eccentric, often brilliant gnomes are held as one of the most peculiar races of the world. With their obsession for developing radical new technologies and constructing marvels of mind-bending engineering, it’s a wonder that any gnomes have survived to proliferate. Over the years, the gnomes have contributed ingenious weapons to aid the Grand Alliance in its fierce battles against the Horde.

Thriving in the wondrous techno-city of Gnomeregan, the gnomes shared the resources of the forested peaks of Dun Morogh with their dwarven cousins for generations. Yet recently, a barbaric menace rose up from the bowels of the earth and invaded Gnomeregan. The troggs — believed to have been unearthed from the Uldaman excavation – erupted beneath Gnomeregan and began to slaughter every gnome within the city. Though the gnomish defense forces staged a valiant defense, they could not save their wondrous city.

At the command of the High Tinker Mekkatorque, the gnomes opened the pressure valves of their giant, grinding machines and released toxic radiation throughout the city. Though the radiation killed the troggs, the gnomes soon discovered that it killed their own people just as quickly. Nearly eighty percent of the gnomish race died within days. Those that survived evacuated the great city and fled to the protection of their dwarven cousins in Ironforge.

There they remain, devising radical strategies to retake their beloved city at any cost. As a gnome of proud standing, it falls to you to answer the challenge and lead your curious people to a brighter future.[3] 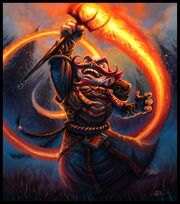 Despite their short limbs and large heads, gnomes are remarkably nimble. They can keep pace with taller races, jump twice their height, and can make quite the

[Escape Artist] by slipping out of both conventional and magical traps.

Their dexterity is also helpful for combat, their

The Expansive Mind of the gnome race is readily apparent to the casual observer. Many of the Alliance's best arcanists, scientists and tinkers have been gnomes.

Engineering Specialization is a defining characteristic of gnome culture, and gnome creations such as the Deeprun Tram regularly make life easier and (more or less) safer for the Alliance's citizens.

Gnomes take the same approach to the arcane sciences as they do to other technologies. Their carefulness and precision with magic have given them a slight Arcane Resistance.

Gnomes have fair starting stats for the rogue class. This is because high agility benefits rogue's critical hit chance and dodge chance. The melee damage of rogues (and hunters) is based on agility as well as strength. A notable feature that sometimes may give a gnome rogue advantage is their very short height. An unprepared and less alert enemy player might not notice the dangerous gnome rogue creeping near him, especially if his camera is pointed upward or he is distracted. Of course this advantage rarely appears and an experienced player knows to be alert!

For the caster classes, gnomes have an advantage early on by having an extra 5% mana applied AFTER the base mana is calculated. This allows them to cast more spells more often than other races, who are limited to base mana for a few levels. This bonus does keep its usefulness throughout the levels of the game.

Why gnomes in the World of Warcraft?

From Insider Interview — with Chris Metzen: Gnomes and Trolls as Playable Races from the Blizzard Insider:

I think we deal with it a little bit in upcoming D&D supplements. During Warcraft II, the gnomes were, in effect, building weapons and lending designs to the Alliance — but they were staying out of any direct fighting. In Warcraft III and Frozen Throne, and even in World of Warcraft, it becomes clear that the gnomes have had internal problems of their own for several years. As of World of Warcraft, they still offer support to the Alliance in terms of building tanks, designing weapons, sending flying machines, and so on. But they had a problem at home that has recently been discovered — an ancient menace from the depths of the underground, called Troggs. The Troggs invaded the gnomes' city of Gnomeregan and wiped it out. The gnomes decided not to let the rest of the Alliance know about this because they figured that they could deal with it on their own. But Gnomeregan fell, probably thanks as much to the gnomes' own actions as to those of their enemies — they likely blew themselves up with whatever failsafe devices they used to defeat the threat. After the destruction of their homeland, the gnomes fled to the safety offered by their nearby allies the dwarves.

In Cataclysm, the Gnomeregan Exiles now have their own unique starting area within Gnomeregan, rather than sharing Anvilmar with the dwarves.

Undocumented changes: Female and male gnome models updated to no longer use a ModelScale of 1.15.