From Wowpedia
(Redirected from Gnome tinker)
Jump to: navigation, search

Tinkers (or tinkerers and tinkologists) are engineers mostly represented by gnomes, goblins, and dwarves of the Alliance, Horde and the Venture Company.

Tinkers (aka tinkerers) are among the smartest of the adventurers setting out to explore and conquer Azeroth. The creators of incredible inventions, from crazy multipurpose knives to steam saws to siege engines, their devices allow them to overcome nearly any situation — and if they don't have the device they need, they just might be able to design and create a new one on the spot. Tinkers have a reputation for being dangerous companions, born mainly of reckless goblins experimenting with explosives. However, tinkers are not usually danger-prone. The real problem arises when they mess with gunpowder or try to build a better steam engine, and even then mishaps and explosions do not occur as often as many believe. However, the true heart of the tinker profession can be found in the steady craftsmanship of the dwarves and the wild-eyed curiosity of the gnomes. As tinkers begin to spread to all the races of Azeroth, the idea of the "typical tinker" may continue to change, but inventiveness and intelligence will always be an important part. Tinkers are most commonly found among the dwarves, gnomes, and goblins as they produce rifles, zeppelins, and other technological innovations currently found on Azeroth. With their general disinterest in technology, night elves, orcs and tauren are the least likely to be tinkers.[1][2]

Gnomes are the Alliance's consummate tinkers. When a member of the Alliance thinks of a tinker, he thinks of a gnome; and when he thinks of a gnome, he thinks of a tinker. Gnomes are in a competition with goblins to produce the best and deadliest technology — a competition that is friendly or fierce, depending on the individuals involved. Gnomish technology is not quite as prone to malfunction as goblin technology, and gnomes tend to produce devices that have more specialized and unusual effects. Goblins make goblin rockets and shredders — fairly straightforward — while gnomes create gnomish shrink rays and universal remotes. The iconic gnome tinker is a mad inventor, wearing goggles on her head as well as over her eyes, with a bandolier of equipment slung over each shoulder; she is covered with oil and scorch marks, looking forward to the next invention. Many find gnome tinkers amusing, but only a few do not also respect or fear them.[4] 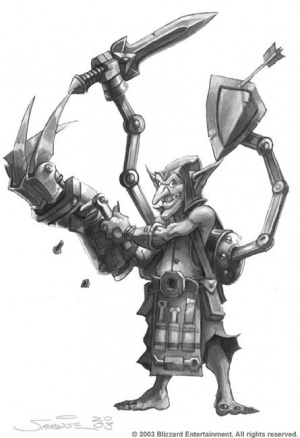 Goblins are mad inventors who produce useful gadgets despite their chaotic, crazed, and explosively-oriented mindsets. They are the ultimate tinkers, competing with gnomes to produce the best devices around. This competition is friendly or deadly, depending on the individuals involved — sometimes it's both. Goblin tinkers differ from their gnomish counterparts. Goblins enjoy instant gratification. They work on an invention until it sort of, kind of functions, then they move on to another one. They get a thrill when they finish something, even if "finishing" means that it works properly one out of ten times.

Goblin tinkers also have a penchant for destructive devices. They like blowing things up and tearing them down. Thus, goblins make rockets, bombs, shredders, flamethrowers and similar devices. Even their creations that aren't directly related to warfare and flagrant environmental abuse have a tendency to explode terrifically when they malfunction. Early goblin zeppelins, while quite stable, functioned by using open flames to warm flammable gas — not a combination to inspire confidence in passengers. Though goblin tinkers amuse many, they do so only at a distance; those nearby eye the tinker with expressions of mixed incredulity and fear.

The iconic goblin inventor grins madly through a leather cap and soot-covered goggles. Devices of all sorts are strapped across his body, many of which look broken. He brandishes… something… to threaten his opponents.[5] Goblin tinkers can speak Common, Dwarven, Goblin, Low Common, and Orcish.[6]