De-shrinkify the Assault Tank and use it to slay troggs.

We need to give Tinkerbow some cover while she figures out our new trajectory.

<The Cog Captain hands you a miniature spider tank.>

It may not look like much, but this is a fully functional spider tank. You'll just need to de-shrinkify it. Use it to distract the troggs down below by thinning their numbers.

Give those troggs something to worry about, Captain![sic] 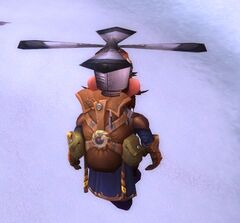 The Backpack Copter taking the player to their new destination 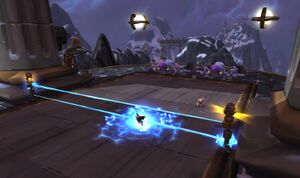 Interact with the Shrinkified Assault Tank to transform it into a full-sized Gnomeregan Assault Tank, then interact with it a second time to enter it. The tank has the following abilities:

Use Rail Shot to quickly kill single Ironbound Invaders and Flame Spray to take down groups of them. All three abilities are castable while moving. As soon as you finish killing 30 troggs, you are automatically ejected from the tank and flown northeast with a Backpack Copter.

Fizzi Tinkerbow says: The tracker is working again, Commander! We've moved closer to the signal's source and are awaiting your orders.

The copter drops the player off on a balcony on the eastern end of the Terrace of the Makers, where the rest of G.E.A.R., the two First Squadron Prototypes, and G.H.O.S.T. await, safe behind an electrical fence. Tinkerbow is working on a teleporter which periodically spawns a walking Squadron Bomb-bot. Ironbound Brutes constantly rush toward the platform in waves, but upon running into the fence they are either transformed into a turkey that dies instantly or an Ironbound Fowl that keeps running mindlessly forward until it either collides with a Bomb-bot and explodes or runs off the edge of the cliff to its death. Talk to Winklespring to turn in.