This item is crafted with Gnome Engineering (225); taught by trainers. 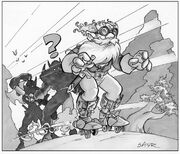 Annoyed by the goblins' success with their powerful rocket boots, the gnomes set out to build a better, more stable version. They succeeded, although the high cost often drives most buyers to the goblin variety instead. Gnomish rocket boots are comprised entirely of layered metal, providing enhanced protection in the event of an accident. Once activated, tiny wheels extend from the soles and powerful jets situated around the heel propel the wearer forward at tremendous speeds. What's more, the wearer retains complete maneuvering control, even while zipping around the battlefield. It is possible for rocket boots to malfunction, and coming apart at the sole; but at least gnomish rocket boots never explode![1]

[Black Mageweave Boots] (41 Armor, +7 Intellect and +11 Spirit) into Gnomish Rocket Boots (41 Armor and Use effect) which function identically to

[Goblin Rocket Boots]. These have no level requirement and can be worn as early as level 20. If other increased movement speed or invisibility items (

[Gnomish Cloaking Device]) are equipped when Rocket Boots are used, a 5 minute cooldown timer will trigger preventing consecutive use. However, potions and class abilities (

[Sprint]) do not share this timer and may be used consecutively.

Use of Gnomish Rocket Boots while carrying a flag in a battleground will cause you to drop the flag.