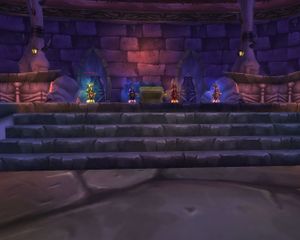 Shrinking worked for most of the raid bosses too...

The Gnomish Shrink Ray is a trinket that shrinks the target reducing their attack power by 250.

This item is crafted with Gnome Engineering (205); taught by trainers.

As most Gnomish Engineering devices, it can backfire with the following possible effects:

This item can affect a majority, if not *all* of the mobs in the game, even bosses once. It can be entertaining to see miniature raid bosses running around, but be careful, as you can grow them as well!

Gnomes are small creatures, and as such they have to look up at members of most other races - even the dwarves with whom they now share the tunnels of Ironforge. Most gnomes can't help but be intimidated when facing a much larger human, orc, or worst of all tauren in hand-to-hand combat. The gnomish shrink ray is the result of years of searching for a way to bring such opponents down to their size. The device looks like a series of concentric plates mounted around a central tip, surrounded by coiled truesilver wires. At the device's core is a chaos generator, which projects a specialized beam through the tip when the trigger is pulled. A gnomish shrink ray is operated like a gun, but has no ammunition and projects a lightning-like ray.[1]