For the building known as a gnomish inventor, see Workshop. 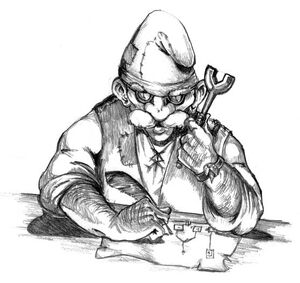 A gnomish inventor from the Warcraft II: Tides of Darkness manual.

A gnomish inventor is a gnome who is renowned for creating innovative and sometimes bizarre devices or contraptions for a variety of uses. Gnomish inventors are the classic counterpart to goblin alchemists.

The inventors were highly adept at creating outlandishly clever contraptions for military use. Among the many bizarre inventions created by the gnomes were the flying machines that hovered high above both land and sea, as well as the implausible submarine that could move under the seas. The gnomes were also responsible for perfecting the technique of extracting various chemical compounds out of oil to make gunpowder and explosives. Although the gnomes were a bit odd and eccentric, none could deny their value to the Alliance.[1]

Before the Third War

In Gnomeregan's heyday, inventors would compete for status by pitting their creations against one another.[2]

In the canceled Warcraft Adventures, one scene had the young Thrall helping the goblin Gazlowe against a group of nearby gnomish inventors. They had notably invented jetpacks for rapid pig delivery, the Homing Chicken series and also had with them a cask of black ale, which was said to be of gnomish origins.

The iconic gnome tinker is a mad inventor, wearing goggles on her head as well as over her eyes, with a bandolier of equipment slung over each shoulder; she is covered with oil and scorch marks, looking forward to the next invention.[4]

Gnomish inventors organize into pairs, an odd crazy-guy/sane-guy relationship. One is always trying to push the limits of his devices to unknowable extremes while the other does everything he can to keep the invention from becoming disastrous. It was two pairings of just this type that created the underground railroad that connects Ironforge to Stormwind Keep.[5]

Gnomish inventors are credited for the creation of several items, such as the Steam Gauntlets, the gnomish rockets and several steam armor upgrades. Devonix is mentioned as a gnomish inventor and explorer.