From Wowpedia
(Redirected from Gnomish submarine)
Jump to: navigation, search 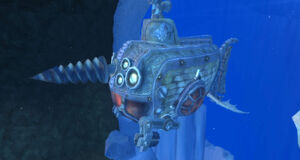 The Pincer X2, a gnomish submarine.

Submarines (or subs) are watercrafts capable of independent operation underwater.

The resourceful gnomish inventors had designed an amazing craft known as the submarine. This watertight vessel could submerge beneath the waves and surreptitiously keep watch on enemy forces above the surface. The gnomish submarine was visible only to towers, aerial forces, and other vessels that moved beneath the waves. Using cunning and craft to carry out surprise attacks on more powerful enemies made the submarine an invaluable part of the Lordaeron armada.[1]

These giant sea turtles were native to the southern seas and were captured by the Stormreaver clan. Pacified by potent spells of control, these lumbering monstrosities were fitted with watertight canopies strapped onto the backs of their shells and were used as submersible orcish craft. By submerging under the waves, the giant turtles could steal upon unsuspecting enemy craft and report their position to the Horde fleet as they were visible solely to towers, creatures of the air, and other submersible vessels. The daring goblins who controlled them were dedicated to destroying enemy ships by launching hazardous, steam-driven canisters containing highly volatile liquids that could shred even the strongest of armor.[2] 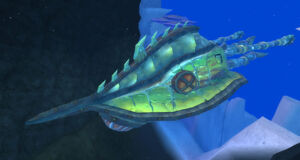 The Verne, a goblin submarine.

The goblins stopped using giant turtles and started to also create their own submarines, like their old rivals. One appears at Venture Bay, resembling the X-52 Nether-Rocket, but lying on its side, and with a periscope on top. It was built by Bubb Lazarr in an attempt to study and thwart icebergs. After the Cataclysm a more sophisticated, squid-like model was created by the Bilgewater Cartel in order to tackle the dangers of Vashj'ir.

The gnomes didn't stay behind, creating the M.A.C. Diver, a gigantic crawler vehicle that doubled as a submarine. A similar vehicle was used to assault Domination Point years later.

The commanders of Lunarfall and Frostwall can also build submarines at their garrison shipyard. They are good against carriers and weak against destroyers.

Starting in the Fourth War, the Alliance had begun to deploy miniature versions of their gnomish submarines that house only a handful of people.

Determined to not let the mysteries of the sea elude their curious minds, gnomish tinkers created these vessels that can travel under the waves.[13] Gnome inventors took their resourcefulness to the seas and created these amazing watertight vessels. The submarines have proved themselves to be a powerful threat to not only ships, but also coastal targets within range of the submarine's battery of rockets.[14]

These paired launchers are placed at both sides of the sub. Although both tubes cannot be fired at the same time, they allow for two quick shots without reloading torpedoes. The ship can hold 20 torpedoes at once.[13]