Go'Shek Farm is a farmstead in the eastern part of the Arathi Highlands, near Witherbark Village.

The rare armored boar Swee can be found in the stables of the farm. 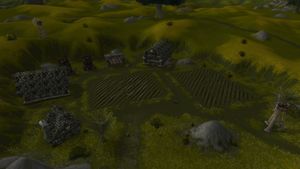 Go'Shek Farm before Battle for Azeroth.

This once-human farmstead[2] was occupied by Forsaken and orcs from Hammerfall some time after Third War. Since then, the Forsaken have been using this farm as test ground for their mysterious alchemical experiments.[3] The orcs seem to be using it for supplies to Hammerfall.

Two agents of the Alliance, Quae and Kinelory, were sent here to investigate this issue. With the help of some adventurers, they managed first to stop a Forsaken Courier traveling to Tarren Mill,[4] and then discovered within the farmstead notes and researches of Apothecary Jorell.[5] It seems the apothecary was working on some new kind of new plague.

The Forsaken once tried to come up with a new plague, but were stopped many years ago. After the Cataclysm, they attempted nearly the same thing, so the Alliance agents Quae and Kinelory teamed up again to undermine the Forsaken experiments.[6] 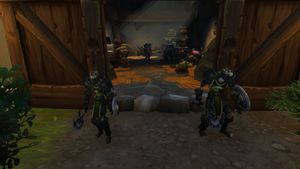 A barn with Forsaken armored soldiers and orc farmers.