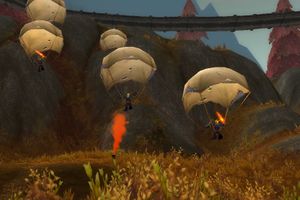 The Gob Squad is an elite goblin squadron working for the Bilgewater Cartel. Its leader is Patch; the other members are Grit, Newt, Ticker, and Volt.

The elite squadron was first seen wondering around the Bilgewater Harbor, apparently off duty. They were called out when the Bilgewater Battalion kept the naga distracted at The Shattered Strand. The Mergers and Acquisitions have set up a small camp in the Ruins of Eldarath for the Gob Squad to land and deal with naga threat is Azshara. Together, they assaulted the ruins with all their weapons and decimated the naga and they claimed the

[Heart of Arkkoroc], it is taken back to Uncle Bedlam which is then believed to be sold to a group at the Secret Lab. They also killed their leaders Lord Kassarus & High Priestess Silthera, recovered some Highborne Tablets and destroyed three Spitelash Runestones. 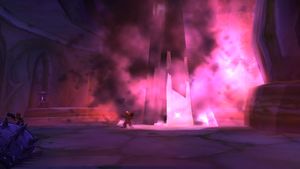 After their success in Azshara, they were sent to the Twilight Highlands for some more action. Their first assignment was to deal with the Alliance at Highbank. They caused some damage in both death & destruction by explosives and recovered the

[Induction Samophlange] which was gethered for them in Azshara. After they were done they escaped on some gyrocopters tethered at the top of the tower by Newt. They are later sent to Dragonmaw Pass were they ambushed the Twilight's Hammer and obtained the

[Twilight's Hammer Gatestone] to open the gate and move to Wyrms' Bend. From there they closed Dragonmaw Gate to prevent Twilight reinforcements from coming in.

The Secrets of Ragefire 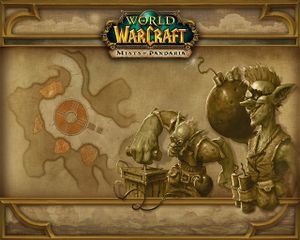 As citizens of Durotar continued to go missing, the Gob Squad was sent to Ragefire Chasm to locate them. What they discovered was Kor'kron doing suspicious activity and attacking any who discovered them. With the help of brave heroes, they were able to defeat the Kor'kron and escape to inform Vol'jin of what they found.

The Gob Squad is sent to Nazmir on Zandalar to aid in the fight against the blood trolls and G'huun. When they first arrived they came under attack by naga. Their mech, known as the A.F.M.O.D., was damaged in their landing, but repaired with the aid of an adventurer named "Speaker of the Horde" by the Zandalari. Their repaired mech is used to clear out the naga forces, and then attack Grand Ma'da Ateena and her corrupted Titan construct at Zul'Nazman. 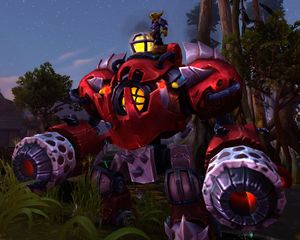 A.F.M.O.D. located at the Sunken Path in Nazmir.