Gobber is a hobgoblin first found in Bilgewater Port. He is somewhat of an anomaly among hobgoblins. He has an almost meek personality (at one point cowering from a fight), high intelligence (for a hobgoblin), friendliness, and banking skills. Gobber is very loyal to the player's character and was the only hobgoblin on the Lost Isles to side against Trade Prince Gallywix. According to Garrosh the hobgoblin has an unpleasant odor. His red skin color is somewhat unique too as most hobgoblins have a purple or whitish pallor. 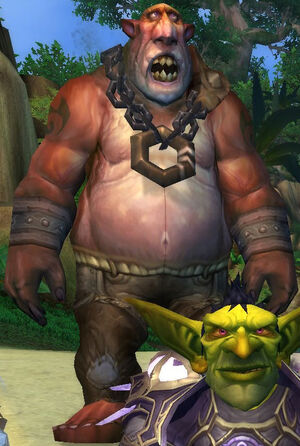 Gobber on the Lost Isles.

He is eventually captured in the Gallywix Labor Mine with Ace and Izzy. Gobber is eventually freed with the others in the quest "Morale Boost" after being given some

After Gallywix was subdued and the goblins started their move to Azshara, Gobber was found wandering around in Orgrimmar. When the player meets Garrosh to give him a message, the new Warchief asks them to take Gobber along with you as seems to recognize you.

After talking to Garrosh Hellscream the player can summon Gobber whenever they like and access their bank through him.

<Gobber acts tough, but you can tell that deep down, he's scared.>

Gobber, I need to look in my pack.