This article is about the playable race. For the goblin lore, see Goblin. For the in-game faction, see Bilgewater Cartel.

The goblins of the Bilgewater Cartel are one of the playable Horde races in World of Warcraft, introduced in Cataclysm. Goblins are notoriously neutral, usually found selling arms and supplies to anybody who can pay, and caring little for faction lines. However, the Bilgewaters became members of the Horde after being shipwrecked alongside them by the Alliance, the forces of which they fought together.

Beginning on their island of Kezan (levels 1-5), Deathwing's destruction of their home forces them to flee by boat. The Alliance intercepts and attacks the goblins, stranding them on the Lost Isles (levels 5-12). After this adventurous introduction to the Horde, the Cartel settled down in Azshara, where they built a new capital, Bilgewater Harbor. The trike is what Bilgewaters ride as a mount. The goblin's racial language is named after themselves, and they also speak orcish. 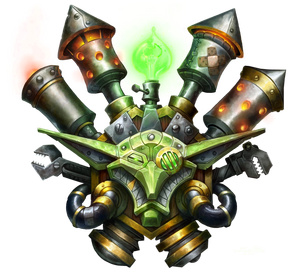 Originally the slaves of jungle trolls on the Isle of Kezan, the goblin race was forced to mine Kaja'mite ore out of the Undermine, deep in the bowels of Mount Kajaro.
Unbeknownst to anyone at the time, the mineral had magical properties that caused the goblins to rapidly increase in both cunning and intelligence.
Tinkering their own powerful artifacts of engineering and alchemy in secret, the goblins overthrew their troll oppressors, taking over the island that they now call home. Quickly rising to prominence as masters of mercantilism, goblins and their global trade conglomerates dominate all commerce across Azeroth.

The wise and cunning goblins of Kezan have lived in relative peace for generations. Though some of their race sided with the marauding orcs during the Second War, most goblins remained neutral throughout the various conflicts of the Alliance and Horde. Ruled over by corrupt yet highly affluent Trade Princes, the goblins created a virtual paradise for themselves throughout the islands of the South Seas. Their fantastic feats of engineering and vast trade fleets helped make their island capital of Kezan one of the great technological wonders of the world. And now, as the elements themselves rise up in anger across the world, the goblins' mechanical paradise will be put to the test. For, very soon, fate will force them to choose sides in a conflict that will shape the very history of the world.

Originally the slaves of jungle trolls on the Isle of Kezan, the goblin race was forced to mine kaja'mite ore out of the volcanic bowels of Mount Kajaro. The trolls used this potent mineral for their voodoo rituals, but it had an unexpected effect on the slaves who were in constant contact with it: kaja'mite generated a startling new cunning and intelligence in the goblins. Crafting their own powerful artifacts of engineering and alchemy in secret, the goblins soon overthrew their oppressors and claimed Kezan for their homeland. The mines that had been their prison, their slave camp, and the base of their rebellion now became the city of Undermine. Weaving through the heart of the island in a dizzying network of tunnels, vaults, and lava tubes, Undermine epitomizes the goblins' complex, unpredictable mindset.

The goblins' natural greed soon lifted them to prominence as masters of mercantilism. Trade princes arose during the First War as the cleverest goblins learned to take advantage of the strife. Great fortunes were amassed, and the Isle of Kezan became a hub for fleets of goblin trading ships. One of the trade princes agreed to lend his faction's services to the Horde in the Second War. Following the Horde's defeat, the goblins learned from their colleague's failed example, and soon they realized that their profits could double if they weren't stuck in such a restrictive relationship. By the end of the Third War, goblins were providing weaponry, vehicles, and devious services to both the Horde and the Alliance.[2]

Many years later, Jastor Gallywix rose through the ranks of the Bilgewater Cartel. Gallywix became the president of what became known as the Copper Street Conglomerate, an advisor to the Tinkers' Union, a major figure in the Trade Coalition, and the second wealthiest goblin in the Bilgewater Cartel - second only to Trade Prince Maldy himself. With the aid of the moguls of the Bilgewater and from Tek'zik Riddlevox, Director of the Tinkers' Union, all of whom believed that Maldy had gone soft (he was known to dote over his daughter, Nessa, with whom Gallywix had fallen in love with on first sight), Gallywix initiated a hostile takeover of the Bilgewater Cartel. He bought the loyalty of Maldy's staff, and replaced his security with his own mercenaries; he even owned the land on which Maldy's manor (the site of his own villa many years later) was situated. Though Maldy hoped to re-buy his possessions with the money he gained from trading weapons to the Alliance, Gallywix eliminated that possibility by destroying Maldy's trade fleet. Now in total control, Gallywix exiled Maldy and his daughter from Kezan, and later arranged his (supposedly accidental) death.[3]

Bilgewater Port, one of the primary cities and home of the Bilgewater Cartel, continued to mine kaja'mite ore mainly for the production of

[Kaja'Cola], a beverage that gives goblins short bursts of ideas, but the kaja'mite supply continued to dwindle. Unfortunately for the goblins of Kezan, their time on the island was limited - a volcano long dormant on the island, suddenly erupted and the goblins found themselves with nowhere to go. Despite the name of the city, there was only one real port to be found, and Trade Prince Gallywix - leader of the Bilgewater Cartel - owned it. Gallywix offered to let the survivors of the volcanic eruption ride his yacht to safety, for a price of course. Frantic goblins threw their entire life savings at Gallywix as the volcano rumbled and threatened to blow the island up for good, and as Gallywix sailed away, he revealed his real plan. Owning everyone's life savings was a good start, but now he had them at his mercy on his yacht he may as well sell them in to slavery as a bonus. If the yacht had made it safely to a port, this may very well have been the case.

However, fate conspired against Gallywix's plans. The yacht managed to sail right into the middle of a naval battle between an Alliance fleet and one Horde ship. The Alliance ships spotted the goblin vessel, and the captain of the fleet ordered the ship destroyed, despite the fact that it was a neutral vessel. Gallywix's ship was destroyed, and the goblin slaves washed up on the shores of a nearby island. In exploring the small island, these goblins encountered a few orc survivors who were obviously enemies of the Alliance that had attacked the goblin ship. Figuring that the enemy of an enemy could actually be an ally (an ally with possibly deep pockets), the goblins assisted the few orc survivors, and discovered why an entire Alliance fleet was after the single Horde ship - the ship was carrying Thrall, former Warchief of the Horde.

Gallywix wasn't done with his plans just yet. He began capturing the surviving goblins and using them as slaves. In a final confrontation, the freed goblins and their new orc allies fought against Gallywix and won with Thrall's help. Gallywix begged for mercy, promising the former Warchief that he would change his ways and reform the way the Bilgewater Cartel was run. After thinking for a moment, Thrall decided to keep the Trade Prince as the leader of the Cartel and asked them to join the Horde.

For now the goblins of the Bilgewater Cartel are happily working alongside the Horde and have transformed Azshara so that the land now resembles a giant Horde symbol - partially out of gratitude, partially out of greed. After all, the Horde is expanding its borders in a major way, and that kind of expansion means a lot of gold to be made for the industrious and unscrupulous. In the meantime, they're constantly seeking a substitute for their beloved kaja'mite, though their efforts remain futile at the moment.

Starting as a goblin

The player starts as an up-and-coming business goblin in the flourishing and busy city of Bilgewater Port. The player does several jobs to make gold and build their reputation, when suddenly Deathwing shows up and destabilises the island's volcano as part of the Cataclysm. The player escapes with the last ship of refugees after paying their life savings to Gallywix, and subsequently being forced to be his slave. The Bligewater Cartel then encounters an ongoing battle between the Alliance and the Horde, and the ship is attacked by the Alliance, not wanting any witnesses to the battle. The player manages to survive and plays a major role leading the survivors on the Lost Isles, rescuing Thrall from the Alliance and earning the gratitude of the Horde. After a battle with the local savages' "god" in the island's volcano, that volcano also erupts and forces the goblins to evacuate. Thrall takes the Bilgewater Cartel into the Horde and offers them a new home in Azshara. At this point the player is level 10 and can choose to continue their adventures in Azshara or branch out to other areas. 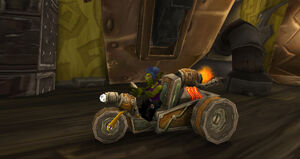 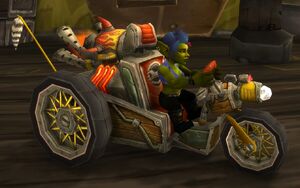 With the Bilgewater goblins now in the trenches with the bigger brutes of the Horde, a significant number of trampling deaths have been reported. Normally unconcerned with such matters, Trade Prince Gallywix was alarmed to learn that Garrosh's Forsaken accountants refused to pay soldier death benefits if the soldiers never got to the actual battle, and accidental stomps caused by tauren maneuvers made it extremely difficult to calculate how many goblins had made it to the battlefield before they were rendered flat. Gallywix offered a substantial cash reward for an invention that could both lift goblins out of hoof traffic and speed them along at comparable velocities so that goblin soldiers could die in “a calculate-able and reimbursable fashion.” Hundreds of submissions were made. Most exploded upon delivery. In the end, the clear (and relatively undamaged) winner was the sturdy transport trike created by the remarkably aged Jibidiah Gragglefutz. 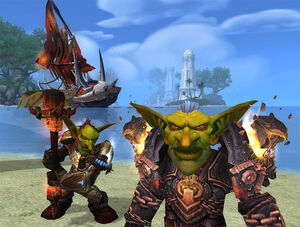 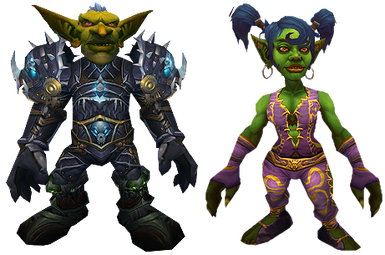 A male and female goblin from Cataclysm.