Goblin Sponsorship is a very long neutral quest chain which is based in the Shimmering Flats of Thousand Needles but sends players to Booty Bay and other distant locations. Two of the goblin team at the Mirage Raceway are the primary questgivers: the mechanic Pozzik and the pilot Razzeric.

This quest is of particular note because the final rewards are on par with level 41 items, but all the quests can technically be received by players as low as level 29. This means that this quest is a must-do for ambitious leather and cloth wearing twinks in the 20-29 PvP bracket.

The competition of the racers on the Mirage Raceway in Thousand Needles is for more than just fame and fortune. It is a racial conflict. Goblins and gnomes have always vied against each other, their love of tinkering and engineering rivaled by no other race. Each seeks to prove themselves superior to the other. To that end, each team seeks powerful sponsors to provide the funding and parts they need. 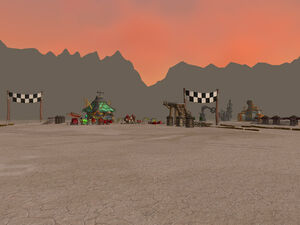 Mirage Raceway, where the goblins and gnomes race head-to-head in their custom rocket cars.

Pozzik the goblin mechanic is offering a good price for vulture bones. Since you are running errands around the flats anyway, you agree to bring him some. Little did you know, this is the first step to becoming heavily involved with the goblin racing team...

A little while after buying the bones, Pozzik offers you another job: A special part, a fuel regulator, that the goblins had ordered failed to arrive. Pozzik wants you to go to Ratchet and try to track it down. He promises good money if you succeed, so you agree and set off for the port town.

In Ratchet, the famous goblin Gazlowe (and incidentally a backer of the goblin racer team), explains that the part never reached him - Baron Revilgaz, the top goblin in Booty Bay, said he would ship it but it never came. Gazlowe suggests you head to Booty Bay to track it down. Realizing that this was becoming more of a headache than you had originally anticipated, but not wanting to quit now, you follow his advice.

On the docks of Booty Bay, you question the wharfmaster about the missing shipment. But he claims to have never seen it. The only thing left to do is to speak to Revilgaz himself. 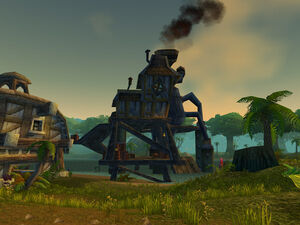 The Venture Co. have their base of operations on the shore of Lake Nazferiti

Revilgaz, it turns out, never had the fuel regulator in the first place. He had sent word to the goblins because he thought he could steal the blueprints for a new design of the part from the Venture Company, who has a base of operations in northern Stranglethorn Vale. But the venture company resistance was stronger than he expected. It seems the only way to get that part is to steal the blueprints yourself, and Revilgaz offers you a hefty bag of silver to do just that.

Heading up to the lake the baron mentioned, you manage to defeat the gnome who is in charge of the place and steal his keys, then return to his house and pilfer the blueprints from his lockbox. At last, with the blueprints in hand, you return to Revilgaz and receive payment.

All that is left to do is return to Pozzik a the racetrack and deliver the blueprints. At first he seems disappointed that the fuel regulator was not already assembled, but as he mumbles to himself he begins to get more and more excited, as new tweaks and modifications to the design come to him. Thanking you, he wanders off to begin his work. 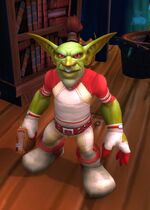 Rocket car pilots are not known for growing to a ripe old age... in fact, they are better known for exploding in giant fireballs. Razzeric is no exception - he plans to go as fast as possible, no holds barred, no safety precautions taken. But to do it, he is going to need help.

After receiving the fuel regulator blueprints, Pozzik sends you to speak with his pilot, Razzeric.

Razzeric has another job for you: he's gone and ordered his own special part, one Pozzik doesn't know about. You gather from his description that it is some sort of turbo booster. But the zeppelin carrying the part crashed in Dustwallow Marsh and, you guessed it, he needs you to go get it. Yet again you are promised good compensation, and so off you go.

The marsh is full of nasty, powerful creatures; crocolisks and spiders and other such beasties. Finally, after slogging through who knows how much slime and goo, you at last discover the crashed zeppelin site. Once there, the booster isn't hard to find. The part in hand, you book it out of the swamp as fast as your legs can carry you. 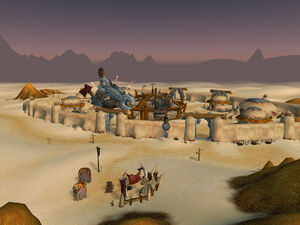 Gadgetzan, an engineering hotspot for goblins and gnomes alike

Razzeric is delighted at the recovery of the part - at first. But then he discovers a safety was left on. And he wants you to take it to Gadgetzan and get it released. Grumbling, you wonder why he didn't just make a trip to Gadgetzan to get the part in the first place, as it is just south of the flats... but as he is paying you for an easy trip, you agree.

The goblin Shreev in Gadgetzan shakes his head in exasperation when you explain what Razzeric wants - it seems there is no safety on the device, it has actually been modified to deliver even more boost than normal.

Despite his misgivings, Shreev modifies the booster further, muttering that he hoped Razzeric didn't kill himself with it - who knew if the nineteenth pilot would be as good? At last you return to Razzeric with the finished part, and he is ecstatic, rewarding you with your choice of his very own seat belt (which he never uses anyway) or his prize racing gloves.

If the player follows the entire quest chain from beginning to end, he or she will receive: