A goblin alchemist riding an ogre slave in The Frozen Throne.

Some fanatical goblin alchemists ride on the back of an ogre slave, who has undergone a series of chemical "treatments" to enforce compliance. Sometimes the ogre shows signs of independence and even outright defiance. However, these outbursts are swiftly quelled by the goblin master, who can be like his concoctions — harsh and volatile. Though personal differences may at times distract this duo, when it comes to biological warfare and raw, brute strength, the goblin alchemist and his ogre slave are truly at the top of their game![1]

Goblin alchemists are masters of volatile chemicals, explosives and strange mechanical devices. They have defied the very laws of nature by constructing zeppelins to soar above battlefields, as well as inventing watertight pilot-shacks for use on the enslaved race of giant sea turtles. They also create the devastating explosives used by their cousins, the sappers.[2] During the Second War they also experimented on the berserkers of the forest trolls,[3] frequenting their lumber mills to give them potions.[4]

Goblin alchemists are maniacal and brilliant masters of volatile chemicals, explosives, and strange mechanical devices. Goblin alchemists belong to the Alchemists' Union which deals with alchemy, cross-breeding and science in general. It is led by Head Alchemist Gigglefont.[6] 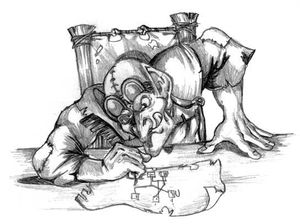 A goblin alchemist from the Warcraft II: Tides of Darkness manual.

Alchemy is one of the things goblin's are truly gifted at (other than steam technology, haggling, and pranks). Despite their recklessness, goblins are among the foremost and greatest alchemists on the planet. While explosives and gunpowder are common alchemical staples, goblins also experiment in other fields. Perhaps the most shocking of their experiments is their rare mutagenic work. Kezan has its small handful of strange and mutated creatures, the rejects of failed goblin experiments. They’ve even experimented on their own kind, creating the stupid but strong hobgoblins. Almost all members of the subrace are kept in Undermine's halls. As large as an orc and resembling a bulky purple goblin, hobgoblins are alchemically created for strength and simplicity, despite their physical and emotional instability.[7]

These goblin alchemists sometimes grant their explosive and chemical warfare to the highest bidder.[8]

Goblins have been practicing alchemy for centuries (if not longer), and it is an art that appeals to their off-kilter minds. They are the most likely to become arcane alchemists.[9] Goblins as one of Azeroth's premier alchemists are also likely candidates to become potion docs.[10]