For the Scholomance subzone, see Laboratory. 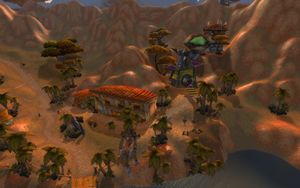 Ratchet and its goblin laboratory.

Goblin laboratories are where the goblins are known to work and sell various services, such as alchemists, sappers and zeppelins.

The maniacal and brilliant goblin alchemists were masters of volatile chemicals, explosives, and strange mechanical devices. Having constructed zeppelins to soar above the battlefield, as well as inventing watertight pilot-shacks for use on the enslaved race of giant sea turtles, the goblins had defied the very laws of nature. They also created the devastating explosives used by their cousins, the goblin sappers. The alchemists took a peculiar delight in these intellectual endeavors that few understood, but all in the Horde respected the havoc that they produced.[1]

These goblins were members of the Steamwheedle Cartel.[2] 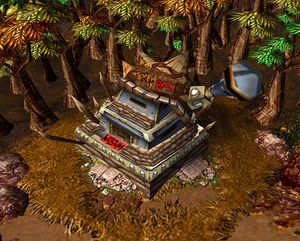 After the defeat of the Horde during the Second War, the goblins realized their mistake and left the Horde. They are now a neutral force, making money off every side. Their services were often key factors in various events during and after the Third War. Examples include allowing the Scourge to access more of Quel'Thalas via zeppelins[4], helping the Horde cut down much of Ashenvale forest via shredders in order to build Orgrimmar[5], and helping Thrall travel to the Stonetalon Mountains to meet with Medivh, also via zeppelins.[6]

Buildings similar to the goblin laboratories of older games can be found in Ratchet, Everlook, Mudsprocket and Fuselight. They are mainly operated by Steamwheedle Cartel goblins.

The laboratory in Ratchet was specifically an observatory.[7]