From Wowpedia
(Redirected from God-King)
Jump to: navigation, search

For his encounter in the Halls of Valor, see God-King Skovald (tactics).

God-King Skovald was the ruler of the Tideskorn, the vrykul of Stormheim, on the Broken Isles. He allied himself with the Burning Legion during their third invasion of Azeroth, and was tasked by his demonic masters with retrieving the Aegis of Aggramar, one of the ancient titan relics known as the Pillars of Creation. He was killed by brave order champions within the Halls of Valor during a last-ditch attempt to claim the Aegis. 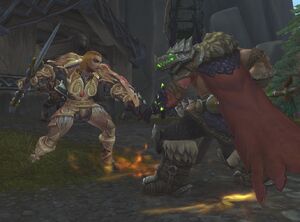 Skovald joined his brothers in murdering their father. Voldgar, as the eldest, was to become king, but the brothers then turned on each other, with Skovald's blade proving to be the fastest.[2] Gul'dan approached Jarl Skovald with a choice: join the Legion and gain ultimate power, or see his people destroyed. Swayed by Gul'dan's promises of conquest and glory, Skovald eagerly accepted. In return, Gul'dan demanded that Skovald bring him the

[Aegis of Aggramar] from the Halls of Valor.[3]

With his father and his brothers dead, Jarl Skovald and his followers, empowered by fel magic, then fought Queen Bretta, his own mother, at Kingsfall Pass. Disgusted with Skovald's actions, she exclaimed with her dying breath that he was no longer her son.[4]

In his quest to gain access to the Halls of Valor, Skovald perverted the ancient trials that opened the gates. During the Trial of Might, he shatters Yotnar instead of besting him and attempts to destroy Aggramar's Vault so that no one else can know the criteria for the other trials. For the Trial of Will, he opts to enslave the Thorignir. For the Trial of Valor, he uses the Bonespeakers to attempt to enslave the souls of the ancient rulers of Stormheim, forcing them to give their blessing.

With the adventurer's efforts to keep up with the God-King, Havi tells them to save an important asset from a previous trial to end Skovald's reign once and for all. Atop the Gates of Valor, both challengers fought and eventually the God-King used his fel magic to end the confrontation for he grew tired of them. He exclaims that the Aegis will be his by right and there's nothing to stop him.

Within the Halls of Valor, Skovald came into the Hall of Glory to see that the heroes were successful in claiming the Aegis. He demanded that Odyn acknowledge his claim to the Aegis, a protest that Odyn said came too late. Skovald attempted to claim the Aegis by force then but was killed, declaring in his final breath that all his plans had been brought to ruin. 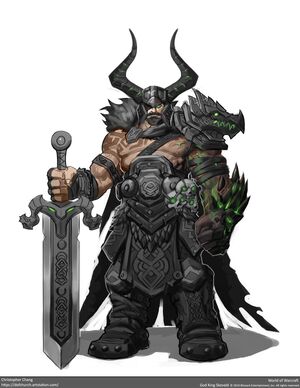