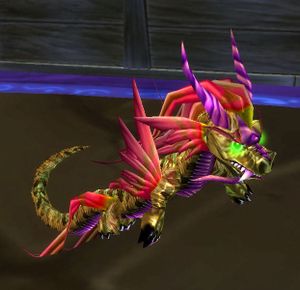 During the 2008 Spirit of Competition event (during the 2008 Summer Olympics in Beijing, China), player characters had a chance to receive the Gold Medallion small pet container in their mailbox after each win in a battleground, until winning one. Each character on an account was eligible to win one.

The pet, 'Spirit of Competition', is a small red and yellow Asian dragon, inspired by the Summer Olympics being held in Beijing for 2008.

Letter from the Spirit of Competition

You have honored the Spirits of Competition with your fervor in the face of the enemy. Congratulations! With this Gold Medallion, they will be proud to be seen at your side.

During the event there were numerous observations about the difficulty and ease of winning this item. In hindsight, it has been observed that this was probably distributed as a random looting roll selection from among the battleground winners who did not yet have this item, rather than a per individual fixed chance to win. This is born out by the observations that winning this item from a win in Warsong Gulch appeared to be easier than other battlegrounds (smaller battleground, fewer people rolling), and that the odds seemed to improve as the Spirit of Competition event progressed (people that do battlegrounds tend to keep doing battlegrounds, people that do not do battlegrounds tend not to do battlegrounds, the population is fairly fixed; as people won the item and dropped out of the rolling pool, the odds got better.)