The Golden Fleet[1] is the name given to the collective naval force of the Zandalari Empire. Based from their home island of Zandalar, the Zandalari fleet is one of the most powerful on Azeroth, despite the recent hardships for the nation. Although the Zandalari civilization is ancient, its legendary fleet has only come into existence since it became an island nation following the Great Sundering.

Since the Sundering, the Golden Fleet has been integral to most of Zandalar's operations in the wider world. Shortly after the opening of Pandaria, the fleet set sail under the Prophet Zul to wage a campaign in the north of the continent, centered around the Isle of Thunder. More recently during the Fourth War, the Zandalari Empire has joined the Horde, bringing its massive fleet with it. The majority of it was destroyed by the Alliance during the Battle of Dazar'alor.

Zandalar would be damaged by the Cataclysm to such an extent that many ventured out into Azeroth in search of a new future. Leading this faction was the Prophet Zul, who directed the Golden Fleet to the northern coasts of Pandaria. Only recently rediscovered, Pandaria held the remains of the legendary mogu ruler Lei Shen, the Thunder King, who the Zandalari intended to resurrect. The fleet made landfall on the shores of Kun-Lai Summit, as well as the Isle of Giants and the Isle of Thunder, beginning a full-scale invasion.[2]

Particularly on the Isle of Thunder, the Zandalari invasion force clashed with expeditions sent by the Alliance and Horde, and were eventually defeated along with the Thunder King himself. Having met with failure, Zul and the Golden Fleet returned to Zandalar. 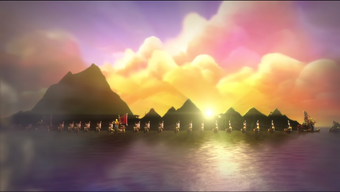 The Golden Fleet drawn up off the coast of Zuldazar

By the time the Fourth War erupted between the Horde and Alliance, the Zandalari had rebuilt much of their civilization, and their fleet was once more a powerful force. Princess Talanji would travel on Rezan's Wake to open negotiations with the Horde, but her ship was captured en route and impounded in Stormwind Harbor.[3] When the Princess escaped, she was pursued to the coast of Zandalar itself, where the Golden Fleet lay waiting. Guided by the loa Rezan, Talanji parted the mists surrounding her ship, revealing the assembled fleet which unleashed a devastating volley on the following Alliance battleships. Only a single vessel survived the bombardment, and the event would convince Alliance leadership of the Golden Fleet's potency.[4]

The Horde would recruit the Zandalari Empire to their cause, with a motivating factor being the strength of their fleet. In particular, this was to counter the potential of the Kul Tiran fleet, which the Alliance simultaneously sought. During the war in Zandalar, mutineers loyal to Prophet Zul joined with a force of mogu to seize much of the Golden Fleet while it sat in the Bay of Kings.[5] This was part of a wider coup engineered by the Prophet, and saw Warport Rastari, Tusk Isle, and the Isle of Fangs fall under the traitors' control. It was only with the help of Horde champions that the Zandalari were able to reclaim their ships and drive back Zul's followers.

As part of the Alliance's war campaign on Zandalar, a major focus was placed on crippling the Golden Fleet. A plan devised by High Commander Halford Wyrmbane saw Alliance agents infiltrate the various sections of the fleet stationed in the Bay of Kings. In addition to recovering important intelligence and carrying out other acts of espionage, they covertly planted special explosives on almost all of the major Zandalari vessels.[6] These remotely-detonated bombs would be used in preparation for a planned attack on Zuldazar itself by an Alliance invasion force. After the success of the mission, the Alliance forces also boarded and destroyed the flagship Gral's Call to prevent their cover being blown, though they took no pleasure in being forced by circumstance in eliminating the entire crew with the exception of Captain Zalkran.[7]

By the end of the war in Zandalar, the Zandalari Empire would officially ally itself with the Horde. In doing so, it added the strength of the Golden Fleet to that of the Horde's naval forces. This was welcomed at a time when the Blood War against the Alliance continued to reach new heights of tension, especially at sea.

After receiving reports of the Alliance invading Nazmir and conquering the Blood Gate, the Zandalari and the Horde decided to combine their forces and drive them out with a counteroffensive.[8] With the Kul Tiran fleet said to be just off the coast of Nazmir, Princess Talanji sent the Speaker of the Horde to get the Golden Fleet to attack them. Captain Rez'okun however, could not mobilize the entire fleet and could only redirect the ships that were already not docked at the Port of Zandalar.[9] Once a majority of the Horde's forces were lured to Nazmir, the Alliance navy revealed that the assault on Nazmir was a ruse and began their true objective: the assault on Dazar'alor. The Golden Fleet sought to impede the Alliance navy's path and harried them with ballistaes, having no clue about the explosives on their hulls.

Just as Gelbin was about to remotely detonate the explosives with his remote detonator machine, the deck behind him collapsed from the impact of one of the Golden Fleet's ballistae missiles into Jaina's ship. Gelbin and the machine fell below to the lower deck and while Jaina shielded the ship, not knowing if the High Tinker was alive or dead, he pulled himself out of the rubble so he could rush to upright his remote detonator. The second the machine reestablished signal contact, Gelbin slammed the detonator button and blew up the entirety of the Golden Fleet stationed there, allowing the Alliance navy to invade Dazar'alor with little resistance. More than half the Zandalari vessels were destroyed in this initial strike.[10]

A few of the remaining ships wrecked on Nazjatar after Queen Azshara opened the seas.