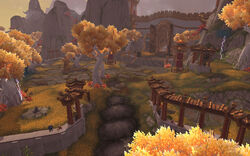 is the grand stairway into the Vale of Eternal Blossoms leading from the Gate of the August Celestials bordering Kun-Lai Summit. The stairs lead into the Emperor's Approach, which continues to the Golden Pagoda to the east and Whitepetal Lake to the west.

After the gateway was opened the mogu took the opportunity to invade the vale taking claim to the stairs and building a camp to prevent the doorway from being closed. They guard the area with cannons, constructs, cloud serpents, and even the undead.

After the events of patch 5.4 and the subsequent destruction of much of the vale as well as the releasing of the Sha of Pride, the mogu that once guarded the area have all been slain by the sha.