For the resources points, see Gold mine.

Goldmine is a goblin shaman of the Earthen Ring. He is the apprentice of Earthcaller Yevaa and has a fire elemental as companion named Magmatooth but they don't get along.

Initiate Goldmine was found in Deepholm and later in Twilight Highlands. He, like many goblin shaman, don't really respect the elements and only see them as tools.

He also assists the adventurers in killing the elementals at Sethria's Roost, apparently being promoted to "Senior Initiate".

As a Journeyman, he traveled to the Heart of Azeroth in Maelstrom during the Burning Legion's third invasion. He researches the class hall upgrades. Goldmine becomes available after completing the mission

Troops in the Field which awards 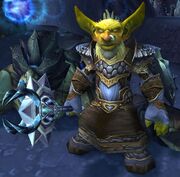 Needs to be spoken with in

Show me my Class Advancement options.