"Lo'Gosh" redirects here. For the human given the same name, see Varian Wrynn.

Goldrinn, also known as Lo'Gosh ("Ghost Wolf" in Taur-ahe),[2][3][4][5] is a Wild God who takes the form of a monstrously powerful white wolf.[2] He embodies ferocity, savagery, and an unyielding will,[2] and legends tell that he possesses unparalleled rage and fury.[5] His is the spirit of the hunter, the animal instinct that kicks in when wild things smell food or feel their children are in jeopardy.[6][7]

Goldrinn is known across all cultures[6] and, according to Takrik Ragehowl, has appeared in many forms on both Azeroth and Draenor.[7] His legend extends throughout Azeroth. Worshiped as an Ancient Guardian by the night elves, the tauren know him as Lo'Gosh. Trolls, goblins, and dwarves all have their own versions of the legend. Each tale tells of how the wolf demigod's unyielding will and ferocity enable him to push through the boundaries of the afterlife to aid his people.[3] Lo'Gosh has always been with the orcs on Draenor as a part of their Horde, in their instincts and blood.[7] When the orcs arrived on Kalimdor, they were told of Lo'Gosh by the tauren. The orcs adopted him as their hero on this new world, for they considered that the will of orcs is strong like his and, like him, not even death can stop them.[3]

It was from a fang of Goldrinn that Belysra Starbreeze and Ralaar Fangfire created the Scythe of Elune, intended to tame the feral spirits of the Druids of the Scythe, but the power of Goldrinn turned them into worgen.[2]

From the moment the wild creatures first stirred on Azeroth, Goldrinn was there.[6] Elune the moon goddess was said to be disappointed in Goldrinn's feral insistence. It was his unwillingness to tame his savagery and bloodlust that overshadowed his noble heart. When Elune's great light illuminated the dark during the full moons, it was as if her eyes glared down upon him in judgement. His anger at her conviction caused Goldrinn to become even more bloodthirsty and indomitable than ever.[8] 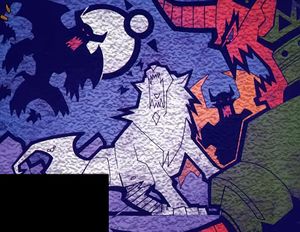 Goldrinn battling against the Burning Legion.

During the War of the Ancients, the white wolf Ancient slaughtered hundreds of demons. It was during this time that Goldrinn's tenacity became legendary. While others quaked at the sight of the Burning Legion, their numbers only spurred the wolf Ancient to ever greater feats of strength. He would wade into the demons' ranks, fangs bared and spattered with their vile ichor, his great claws thrashing them by the dozen. He eventually fell to the demons' great numbers,[6][7] yet his spirit was said to live on, watching over those he favored.[9]

According to a tauren legend, Lo'Gosh confronted the Burning Legion in the lush land that later became the Barrens. Though hopelessly outnumbered, he slaughtered hundreds before succumbing to his wounds. However, not even death could destroy his will to save his people.[3]

The night elves have a similar tale of how the ghost-spirit of Goldrinn aided the night elves of Eldre'Thalas in holding their city against the Burning Legion.[3] It was said he stayed behind to cover the elves' retreat from Eldre'Thalas[6] and his spirit guided the elves to key defensive positions at critical moments during the battle. After the battle, Goldrinn was never seen again.[3] 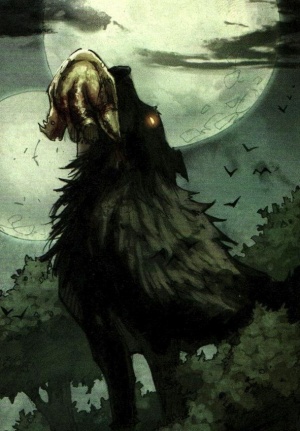 Goldrinn in Curse of the Worgen.

The Druids of the Pack were a sect of druids who followed Goldrinn. The druidic pack form, which drew on the fury of Goldrinn, was uncontrollable and therefore banned by Malfurion Stormrage. In an attempt to control it, Ralaar Fangfire tried merging Goldrinn's essence with that of Elune by affixing one of Goldrinn's fangs onto a staff that the moon goddess had blessed, creating the Scythe of Elune. This backfired horribly, as Goldrinn rejected the moon goddess. The druids were turned into the feral worgen instead, whom Ralaar led to seek revenge on the satyr and night elves alike. The other druids agreed that these worgen had to be locked away, and thus put them into eternal slumber beneath the Great Tree Daral'nir within the Emerald Dream.[10]

During the Scourge assault on Gilneas, the archmage Arugal summoned the worgen from the Emerald Dream in order to unleash them upon the undead.[11]

Goldrinn's spirit seems to live on, favoring and inhabiting the human king, Varian Wrynn. It is suspected that Goldrinn not only admired Varian's ferocity, but also his ability to tame it; something he himself was never able to do. Whereas Goldrinn's noble heart was overshadowed by his desire for bloodlust and vengeance, Varian's ferocity was tempered by his desire to protect and uphold justice. His choice to champion Varian seems to be another last redeeming act to Elune.[4]

Players will find the shrine of the wolf god Goldrinn, inhabited by corrupted worgen, and recover it.[12][13] After recovering the shrine, the player must purify the shrine by summoning and slaying the dark ancient Lycanthoth, who is the twisted version of Goldrinn. Thereafter, his spirit will appear to aid Hyjal's defenders in routing the Twilight's Hammer.[14] 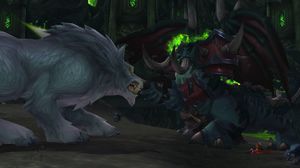 Goldrinn chose Varian Wrynn as his champion because of his ferocity, but also because of his ability to conquer his bloodlust to uphold his beliefs and protect his people. After Varian's death at the Battle for the Broken Shore, Goldrinn retreated to the Stormrage Barrow Dens in Moonglade to reflect. While sleeping within the Emerald Dream, the Burning Legion attempted to corrupt his physical body but were stopped by Thisalee Crow and the Archdruid of the Dreamgrove, who had been sent by Aviana. At first Goldrinn was not aware of what had happened, but upon learning the fate he narrowly avoided, Goldrinn realized that he would not be the last Wild God to be targeted. Thisalee and the Archdruid vowed to find the demon responsible for this plot, and Goldrinn ran off into the wilds.[15]

On the Broken Shore, Goldrinn fights alongside many Druids of the Claw and Dreamgrove Menders against wrathguards and the pit lord Xargraxach.[16]

Tess Greymane, the princess of Gilneas, wished to become a worgen so she could better know the plight of her people to better rule them when she becomes queen. As her father and mother were against it, they asked the night elf druid Vassandra Stormclaw to help Tess understand the worgen's plight without becoming a worgen herself. Vassandra called on Goldrinn at the Twilight Glade in Duskwood, and Goldrinn put Tess into a dream scenario within the Emerald Dream. In her dream Tess was a worgen at the time of the Forsaken Invasion of Gilneas, but was unable to save her brother from his death and she fell into the rage of the curse. With Goldrinn's help Tess realized that she did not need to be a worgen to understand her people, for it was being Gilnean in spite of the curse that defined them.[17] 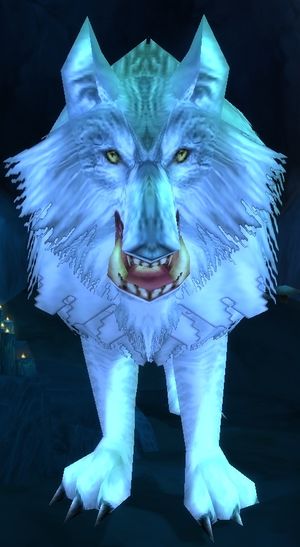 Spirit of Goldrinn in Cataclysm.