Golganneth in the Warcraft Saga

Golganneth the Thunderer (pronounced "GAWL-guh-nehth")[2] is a member of the titan Pantheon and is the lord of the skies and roaring oceans.[1][3][4]

His was ultimately killed by Sargeras alongside the rest of the Pantheon during the battle at Nihilam.[5] While their bodies were destroyed, the spirits survived, launched themselves through the Great Dark and then slammed into the Keepers of Azeroth.[6]

Sargeras would eventually capture the spirits of the Pantheon, except for Eonar who escaped. Aggramar succumbed to Sargeras's torture and was revived as an avatar[7] on the planet Argus to serve the Burning Legion. Aman'Thul, Khaz'goroth, Norgannon, and Golganneth were tortured by the Coven of Shivarra with the goal of breaking them as Aggramar was. After Argus the Unmaker was defeated, Sargeras struck out at Azeroth and wounded her heavily in Silithus. Immediately thereafter the Pantheon imprisoned him within the Seat of the Pantheon. Illidan Stormrage, who stayed behind while his comrades left, serves as Sargeras's jailer. 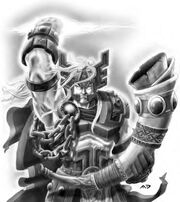 The platinum-skinned giant holds a scintillating horn in one hand; the other rests easily on his hip. A hint of a smile plays across his face, while lightning flashes constantly from his eyes.[10]

Golganneth is a male Aesir titan. His classes are Barbarian and Fighter.[11] He carries a horn named Shargahn.[10]

Creator of the seas and skies, Golganneth is the father of Azeroth's sea giants and loves flying and swimming creatures above all else. He has a massive laugh, which he uses often, and a fine sense of humor. Aman'Thul's mighty son, Golganneth is a diligent, energetic titan who takes great joy in all he does. He revels most of all in storm and the rage of the winds; though he exists to bring order, of all the titans he secretly loves the fury of nature. When angered, he is truly frightening.[10]

Golganneth influences the seas and skies, and their native beings. Azeroth's sea giants venerate Golganneth and hold small ceremonies several times a year in his honor. These ceremonies involve the crafting and sounding of musical horns and the feeding of small fish.[10]

Golganneth has some similarities to the "thunderer" archetype, of which the Norse god Thor is a famous example. Shargahn also has a tie with Thor's hammer, Mjollnir, in that neither are traditionally weapons (in old Nordic times hammers were used exclusively as tools, and were considered a very strange choice for a weapon). Golganneth's horn is more reminiscent of Heimdall, but his province of the sea and storms most closely links him with Njord, also of the Norse pantheon, or Poseidon/Neptune, Greco-Roman mythology, respectively.[12]