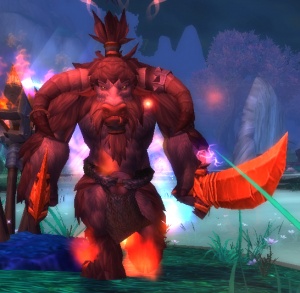 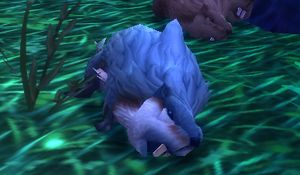 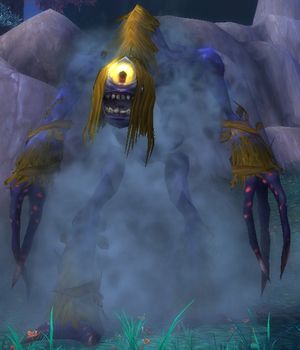 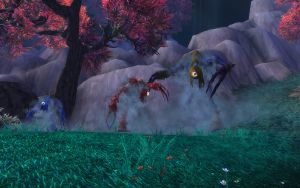 Summon Golgoss by planting the Mist-Shaman's Torches into the Peat Clump in the Upper Sumprushes.

The leader of the yaungol mist-shaman is named Jahesh. He is known for his strength.

One of my kind is also known for his strength. His name is Golgoss.

Golgoss sleeps within the mists of the Upper Sumprushes. Help me to summon him, and he will join me in avenging our people.

Golgoss is no coward. He will relish the opportunity for revenge.

Golgoss does not speak your language, other than a few words. I suppose I am unique in this regard.

He thanks you for summoning him.

Head back up the ramp to the east to the Upper Sumprushes. On the first island is the Peat Clump. Plant the torches. An Osul Mistbreaker will spawn, aggroed on Golgoss. Take it out. Another will spawn, so kill it. After that, at least a dozen weak Small Swamp Rodents will spawn. Use area of effect abilities to take them out. Finally, one last mistbreaker spawns. Once it's dead, Golgoss awakens:

He lumbers over in the direction of Orbiss.

The Peat Mound is on the island just southwest of the big island in the center of the upper swamp. The same pattern of mobs will attack Arconiss - mistbreaker, mistbreaker, rodent swarm, mistbreaker. Take them all out then head back to Orbiss.