Not to be confused with Gon.

Gonk, the Great Hunter, is the ancient raptor loa of shapes[5] and master of the hunt.[5] The Darkspear trolls heard many of the Zandalari's tales about Gonk.[1] He taught both tribes how to be druids, and the Zandalari druids serve him as the Raptari. Gonk's high priest is Wardruid Loti. The followers of Gonk and Pa'ku do not get along.

Gonk taught the Darkspear tribe how to contact the loa in a different way than they had before, thus allowing them to serve all the nature spirits at the same time instead of only one at a time as they used to do as loa priests (witch doctors). The other loa, such as Shirvallah, were against this but Gonk forced their hands in order to defeat Zalazane, who had trapped several loa inside the Emerald Dream. Through this method the Darkspear became druids, though the other loa are not happy about it and want the trolls to continue worshiping them one at a time.[1]

Unlike the Darkspear druids, Gonk did not just speak to the Zandalari. For his Raptari, Gonk is not just a fragment or piece of him, but physically there, a real voice they can listen to in person.[6]

While aiding Wardruid Loti and Hexlord Raal against the Crimson Cultist within of Zanchul, the Speaker of the Horde became imbued with the powers of Gonk and Pa'ku. Following the death of Dregada, the Speaker was informed that they had to choose between the loa.[7] Those who chose Gonk sought him out within his den within the Garden of the Loa, where in exchange for them raising a shrine in his honor at the steps of Dazar'alor, he accepted them into his pack.[8]

When the Atal'zul began their uprising against Rastakhan, Loti hurried to save Gonk only to find that Gonk had already slain the attackers who sought to kill him and drain his power.[9] When the time came to hunt Zul, Gonk was among the army that King Rastakhan gathered. He was tasked to lead his followers to the Temple of the Prophet and slay any foes he found.[10] Following the death of Rezan, Gonk ordered for a full retreat from Atal'Dazar. Noting that only Rezan's power could keep Bwonsamdi from claiming King Rastakhan, who was sorely wounded and aging fast due to Rezan's death, Gonk revealed that he would offer Rastakhan his own power if not for the fact that it was not Gonk's domain to challenge the loa of death.[11]

Gonk participated in the defense of Zuldazar when Zul and his forces sought to destroy the Great Seal. He, Pa'ku, and Kimbul battled Mythrax the Unraveler while Rastakhan took care of Zul.[12]

During the Faction Assault on Zuldazar, Gonk discovered that the void elves sought to corrupt his raptor children with their dark magics. In response, he granted his boon to those who would follow his command to bring him their heads.[13] The loa later assisted his chosen aspect during the Battle of Dazar'alor.[14]

In accordance of the ritual of queens and kings, Talanji sought the judgment of the loa.[15] During the trial, Gonk addressed the importance of the pack and its allies, specifically mentioning vulpera, tortollan, and even the Horde.[16]

[110 - 120] Gonk, Lord of the Pack
Ah, a <class> walks in my den. Tell me little <race>, have you come to bargain?
Long ago I decided to let my followers choose any loa to follow. But for a boon, well, for that I require you to be a symbol of my power to the people of Zuldazar.
If you wish for my boon, return to the steps of Dazar'alor, and raise a shrine to me worthy of the gods.
Do this, and I shall consider you one of my pack. Do we have a bargain?

During Web of Lies questline
Do what you must while we search for Zul, little hero. But be ready, we will have need of your ferocity soon enough.

[110 - 120WQ] Wrath of the Ravasaur
The elven puppets of the void have come to infest my children with their dark magics. Gather my children and then bring me the heads of these pious abominations.

During the March of the Loa questline
Our prey is near. The blood of Zul, Yazma, and their heretics will soon be spilled. It shall be a great hunt.

After Rezan's death
The loa of kings has fallen. We must use caution if we are to launch another hunt.
Rastakhan is sorely wounded and aging fast. Only the power of Rezan could keep Bwonsamdi at bay. I would offer him my power, but it is not my domain to challenge the loa of death.

Lithe and soundless with padded paw,
He's quick of mind, and sharp of claw.
He fills de heart with honor and awe.
He is Gonk!


In defense or on attack,
He de one dat has ya back.
De mighty master of de pack.
He is Gonk! 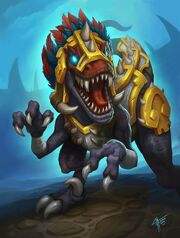 In the Hearthstone expansion Rastakhan's Rumble, Gonk serves as the patron of Gonk's Raptors, a dinosaur-themed team of troll druids, and personally appears as a legendary druid card. His flavor text reads: "There's a word for Zandalari druids who refuse to pledge loyalty to Gonk: "Delicious.""

Based on being the "loa of shapes" and the part in Tales of de Loa: Gonk that says "Be it hoof or paw or hand/He roams de sea and sky and land", Gonk may be capable of shapeshifting like his druid followers.