This article is about character Gorak Tul. For the boss encounter and strategies, see Gorak Tul (tactics).

Gorak Tul was the king of the Drust, a seafaring people that settled the island of Kul Tiras a long time ago. A savage leader and a wielder of powerful magic, Gorak Tul led the Drust in a war against the initial human settlers who had come from the continent. Despite being defeated by Arom Waycrest, Gorak Tul endured, waiting hundreds of years to enact his revenge. He reached out to the grieving Lady Waycrest and used her to spread his corrupt influence throughout Drustvar in hopes of wiping out the Kul Tiran people. His plans were thwarted by the Order of Embers, and he was eventually defeated by Katherine and Jaina Proudmoore.

Around 2,700 years ago, humans from Gilneas arrived on an island that they would later call Kul Tiras.[2] The Drust already lived on the island when the humans arrived, and from Drustvar they enacted raids against the humans' fledgling hamlets.[3] The Drust barbarians attacked the human settlers unprovoked. When the humans landed they tried peace but the Drust went to war immediately, and only a few tolerated new neighbors. They glorified the slaughter, attacking unarmed civilians.[4] When Sef Iwen spoke out against Gorak Tul's brutal methods, he gave her an ultimatum, to attack the humans or to live in the woods forever, Sef chose the latter; believing Tul simply meant to exile her. Instead, she was murdered by Gorak Tul and her soul torn from her body then shackled to the remains; forcing her to live as a spirit forever in the woods that would eventually become the Glenbrook Hunting Grounds, her death meant as an example to those who would seek to work with the humans.[5] This, amongst the other atrocities that Gorak Tul would commit against the humans, eventually led to Sef's fellow Thornspeakers rebelling against Gorak Tul and aiding the humans. 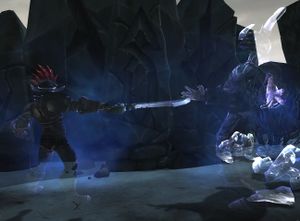 In time, the Drust would be forced to withdraw as they lost numbers to the human settlers. When Gorak Tul ran out of living warriors, he conducted a ritual to create stone constructs to fight for him as part of his desperation to win. Colonel Arom Waycrest led the humans' final assault on the Drust and stabbed Gorak Tul himself. As he was stabbed Gorak Tul's power was broken and with it his connection to his stone constructs, which shattered.[4] But though wounded and broken, Gorak Tul did not die.[6]

The Drust would live on as spirits, trying to return to the physical world.[7] The Waycrests had wiped out the Drust, but could not destroy Gorak Tul. For countless years he waited to enact his vengeance from within Thros[8] until Lady Waycrest provided the means.[9] Lady Waycrest had contacted Gorak Tul in the hopes of keeping her ailing husband from leaving her.[10] Gorak Tul taught the Drust's ancient death magic[11] to Lady Waycrest, who in turn formed the Heartsbane Coven. The coven's magic awakened the remaining stone constructs[3] and stirred the Drust's spirits, causing some to rise as skeletons.[12]

When the Coven attempted a rite to bring Gorak Tul back into the world,[13] Inquisitor Joan Cleardawn, Master Ashton, Marten Webb and the adventurer confronted Gorak Tul in Gol Inath and succeeded in pushing him back into the Blighted Lands.[14][15] After Lady Waycrest's, Gorak Tul attempted to enter the physical world once more, at the Rupture.[9] Though he was defeated once more, it was revealed that it was merely a vessel and that Gorak Tul still dwelled within the Blighted Lands. Even so, the Heartsbane Coven was broken and Drustvar was released from Gorak Tul's power.

When Jaina Proudmoore was exiled to Fate's End by her own mother, Gorak Tul captured her and dragged her into Thros.[16] When the people of Kul Tiras sought to rescue Jaina and turned to the Drust druid Ulfar for help, Gorak Tul attacked him and the Thornspeakers who he had taught the Drust's ways to. Gorak Tul was not happy that Ulfar had shared their gifts with the humans, but Ulfar himself saw Gorak Tul's twisted ways as bringing disgrace to the Drust.[17] When he sent the adventurer on their way to empower an effigy to open the way to Thros, Ulfar warned that since Gorak Tul was vulnerable within it, he would go to great lengths to prevent their entry.[18] Within Thros, Jaina was being tormented by memories of her past. After she was saved by her mother, Jaina and the adventurer defeated Gorak Tul in his own domain.[19]