For the dwarf, see Gordun.

The Gordunni (or the Dire Maul Gordunni clan,[1] the Gordunni Ogres,[2] and the Gordunni Clan of Ancient Draenor)[citation needed] [3] is an ogre tribe[4][5] or clan[6] based in central Feralas. Many have taken residency in the Ruins of Isildien in the High Wilderness as well as the foothills north of Camp Mojache, while the "upper class" is found in Dire Maul. Like most of their kind, Gordunni ogres are remarkably bloodthirsty and are comprised both of melee warriors and spell casters. Gordunni ogres have proven to be highly detrimental to the land of Feralas, desecrating its cultural treasures and despoiling its lush forests.[citation needed]  In the ruins of an ancient night elven city, the Gordunni have established Dire Maul, a stronghold of some potency and power.

They also collected the cobalt minerals and became protective of it, burying it in the ground.[8]

The hyenas that follow the ogres used to accompany the Woodpaw gnolls.[9]

They are known to take various slaves for their gladiatorial fights in Dire Maul, including the Feral Scar yetis and murlocs.[10]

Over the recent years, Gordunni ogres have steadily expanded their area of influence in Feralas, raising concern among some of the Horde lieutenants that, if left unchecked, their expansion will eventually threaten Horde interests in the area. To this end, Belgrom Rockmaul in Orgrimmar has put out a call to many adventurers to travel to Feralas and assist Horde forces in their fight against the Gordunni. Rok Orhan in Camp Mojache is one of Belgrom's lieutenants and is always ready to find some work for adventurers looking to thin Gordunni ranks.

Terrible whispers from the Emerald Nightmare plagued King Gordok's mind, urging him to madness and slaughter. He commanded his clan to indiscriminately murder anyone they could find.[11]

The Gordunni (possibly the members that remained in Outland) have made their presence known in Outland, setting up a settlement in the Barrier Hills, overlooking Shattrath City. They are led by Slaag, one of the seven sons of Gruul the Dragonkiller.

The Gordunni hold gladiatorial games in Dire Maul every year. Last year champions of the game were the Gordunni ogres Two-Heads, Giago and Brlee.[12]

The Gordunni clan has been raiding the Forgotten Coast for several years, taking murloc prisoners for their gladiatorial pits. Some time after the Cataclysm, the ogres raided the murloc village on the Coast and took a dozen of them to Dire Maul. They also heavily deforested part of Feralas, driving the Feral Scar yetis and Woodpaw gnolls further east.

The boy was sought after by the Hidden whose members attacked the gates of Dire Maul and entered its amphitheater. Malus, leader of the dark organization, fought and killed King Gordok, becoming new King of the Dire Maul Gordunni clan, the new Gordok. Since the boy and his friends escaped, Malus declared the Gordunni ogres to be no more as they are Hidden now and ordered all of his new ogre minions to leave Dire Maul and find Aramar.[14] As such, all Gordunni ogres completely evacuated Dire Maul, being sent to Feralas, Thousand Needles, and Tanaris. Most of their elites were killed by the Hidden, but Malus wanted to have their remaining best organized into an elite force. In order to keep Throgg loyal, the new Gordok assured him that once the business with Aram and the compass is done, he will renounce being Gordok to anyone Throgg will choose and the Gordunni will return to Dire Maul.[15]

While Wordok used to lead his group of slave hunters to western Feralas, Marjuk was taking his to eastern Feralas. After Gordok's death, Marjuk found the Feral Scar tribe's new home and invaded it. His group of approximately 20 ogres was killed by the tribe's members and leader Feral Scar, aided by Aram's group.[16]

Eventually, Malus and his Hidden caught Aram and took his compass, bringing them to Xaraax's citadel in Hellfire Peninsula on Outland. Malus didn't bring only the boy, he also the approximately a dozen of Gordunni ogres there to act as his bodyguards. When Throgg discovered this, he confronted Malus, but the human king of ogres told him that he had decided to keep the title as King Gordok. When Malus killed Xaraax and became corrupted by fel, he commanded Ssarbik to bring the Gordunni bodyguards to him in order to feed them to the Darkstorm. Upon hearing this, Throgg shouted in protest, but the fel-corrupted Malus ignored him. Soon, the Gordunni in shadowy-shackles were brought to Malus by a jailer. A portal emerged and sucked them, stunning Karrga in shock.[17] Upon seeing this and the fel-transformed Malus, Throgg renounced him as his master and as King Gordok, saying that he has no honor and betrayed the ogre clan. Eventually, Malus was killed.[18] The status of the remains of the clan is unclear after the death of Malus, the last Gordok, but it can be assumed that they returned to Dire Maul and became independent.

Gordunni do not have any funeral traditions, and simply leave their dead where they lie.[19] 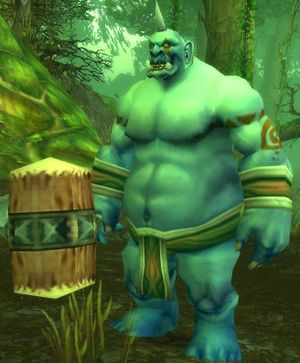 In Gordok society, their king is simply their strongest warrior.[22] If their king, King Gordok, is slain, the slayer will become the new king and takes on the name "Gordok",[23] this is the way of most ogre clans.[citation needed]  Only an ogre is allowed to become King Gordok, however,[24] Malus is the first known exception to this.

When Malus took over, the Hidden killed most of the clan's elite warriors, referred to as Gordok's best.[25] This may refer to (or include) the Gordok upper class.

According to Traveler: The Spiral Path, many of the King Gordok's elite warriors were killed by the Hidden. The new king Gordok, Malus, had the remaining best warriors gathered, but none of the above mentioned ever appear, leaving their fate unclear.

The subject of this section did not make it out of the PTR stages of patch 1.3.

Talking to friendly Gordok mobs after becoming their king

In the recent Brewfest festivities, even a few Gordok have forgotten their initial hostilities and brought something from their tribe to share with all: the powerful but delicious

[Gordok Grog]! The Gordoks have now established a presence in both Alliance and Horde territories selling their trademark alcohol to everyone with Gordok Festive Kegs.